2 December 2013, New York – Only a week into its very successful Kickstarter campaign, ROCKI announces that they have added a new model to their Wifi Multiroom Music System product line-up. Having secured funding on the first day, ROCKI said in their thank you message that they would soon be revealing their plans for the extra funding they are receiving. 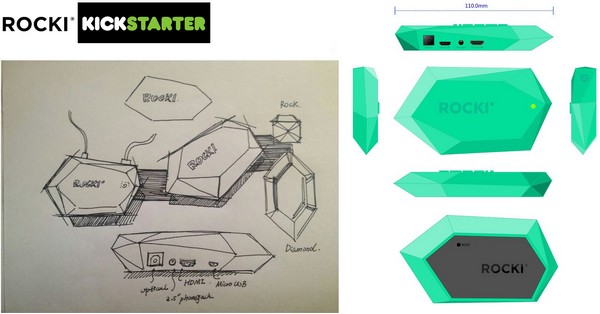 “We are aware of the fact that the audio enthusiast only wants to use the best possible connection to their setup – we are crazy about sound quality too so we know this is a major addition to getting the best experience possible. So we have been working on the ROCKI PLAY+ as a follow-up to the ROCKI PLAY, originally scheduled as a product-line expansion after Kickstarter. In our active engagement with backers we found that there is a significant number of enthusiasts backers who have digital sound systems in their living rooms. The feedback is also that they would appreciate the HDMI or Optical connection. So we did both! And now thanks to the amazing support from our backers with pledges supporting our start-up (1200+ backers with over $100K in pledges in a week) we are proud to announce the completion of this new model PLAY+.” says Dennis List, Product & Marketing Manager, ROCKI

ROCKI PLAY is available on Kickstarter for pledges of

ROCKI PLAY+ is available on Kickstarter for pledges of

Both ROCKI MY HOME sets come with the complete set of 6 ROCKI Colors, silicone covers that let you fit ROCKI to your style or into its environment. The six colors are “Paint It BLACK”, “Hot Chili Peppers RED”, “Submarine YELLOW”, “Pink Punk PINK”, “Deep PURPLE” and the ROCKI brand color “ROCKI GREEN”.