With the gamer looking for more power stability at higher performance levels, Albatron has spared no expense in implementing a sophisticated CPU power supply system. The CPU power supply area of the K8X890 Pro Mainboard resides in an area called the VRM (Voltage Regulator Module). Power is delivered to the CPU in what are called ‚phases‘. Each phase carries its share of the total power that is required by the CPU. The more phases you have, the less power is required from each phase. Less power carried by each phase reduces the temperature load on a phase’s components (MOS – Metal Oxide Semiconductors), ensuring more stability and a longer life. The original 3-phases of the VRM power area has been increased to 4 phases by adding a PWM (Power Width Modulation) module with the 4th phase. The PWM module is actually an interface card that installs easily onto the VRM area of the mainboard.

The K8X890 Pro also uses a VIA K8T890 Pro Northbridge supporting the newer PCI-Express interfaces. These PCI-Express slots include an x16 slot for VGA cards and an x4 slot for future network interfacing. As for the memory, this board supports Dual Channel DDR400 for added performance enhancement.

The K8X890 Pro has a built-in VIA Envy 24PT audio chipset, supporting 8-channel (hardware) audio, which allows the customer to use 7.1 channel amplifiers to simulate professional-quality studio audio. The board also has a built-in Marvell gigabit LAN providing 10/100/1000 Mbps network connectivity. 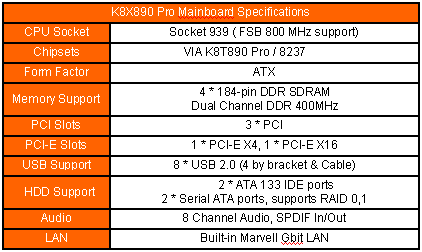