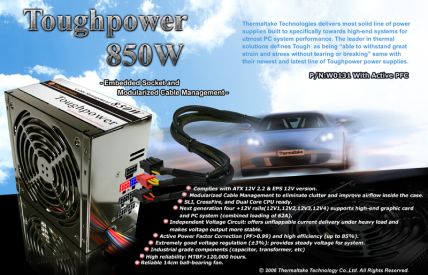 Since the Toughpower series are deemed as the most reliable power supplies ever, the high-efficiency, high-performance, and high-reliability nature of these units enable them to naturally have a MTBF of more than 120,000 hours. The endless energy that the Toughpower supplies are delivered to every single component within the computer system, including the latest Intel and AMD dual-core processors, multiple PCI-Express video cards, and arrays of redundant hard disks. The Toughpower series supplies four independent lines of +12V (12V1, 12V2, 12V3, 12V4) rails for the purest and most stable for the most demanding hardware within your system. The strict voltage regulation of 3% variance, independent output rails, higher than 83% efficiency at all times, and a huge 14cm dual ball-bearing fan all work together to provide the user with endless energy at all times. In addition, the total maximum total current output of 62A on +12V rails will be able to support even the most demanding system configuration available. The features do not stop here, the Toughpower Cable Management 750W features modularized cable sets. Users can plug and unplug cables according to their own needs. As a result of optimizing the cables within the computer system, airflow increases, styling increasing, and the overall ambient temperature within the system drops significantly, providing a more stable computer system.

Thermaltake Technology guarantees the Toughpower power supply’s design and efficiency to be so pure, the series provides an extended 3-year warranty service.