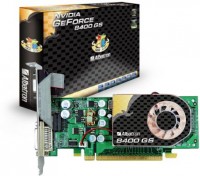 June 20, 2007 – Albatron Technology recently announced the 8400GS VGA for the Entry-Level market. What makes this news exciting is that it gives cost-conscious users access to very advanced technologies that are, themselves, just entering the market. These technologies include support for DirectX 10 and Shader Model 4.0 Video Games, HD-DVD and Blue-Ray video playback. It is a huge step up from integrated graphics and provides a low cost solution to bring Windows Vista 3D performance to your desktop. 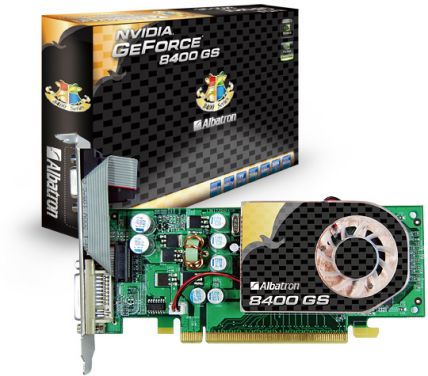 Blue Ray and HD-DVD video playback and PureVideo HD
If you stopped by the Albatron Showroom at Computex 2007, you could have witnessed the astounding clarity and precision resolution of Blue-Ray video. Both HD-DVD and Blue-Ray boast resolutions up to 1980×1080 and if that doesn’t make you blink, think of your current DVD movies (720×576) but with almost twice the resolution. You have to see it to believe it. Another advantage for this card is that it features NVIDIA’s PureVideo HD technology which will protect your CPU from video playback impact focusing most of the processing on the GPU itself.

Unprecedented Entry-Level VGA with Cutting-Edge graphics technologies
It’s not often that you see Entry-Level products geared up for horizon technologies but that is just what the Albatron 8400GS provides. It is a low cost solution that lays the foundation for exciting technologies that are just around the corner.