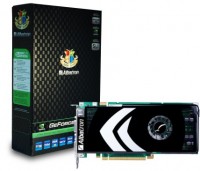 October 29, 2007 – Albatron has announced the 8800GT-512, a new performance 8800 Series VGA card that has already begun to stir the marketplace. Features for the NVIDIA® GeForce® 8 series have evolved since the introduction of the original enthusiast 8800 Series last November. The 8800GT-512 is a unique blend, consolidating all of the changes to the 8 series over the last year and boosting it with new technology. The result is an affordable VGA card boasting full features, low power consumption and enthusiast performance levels. 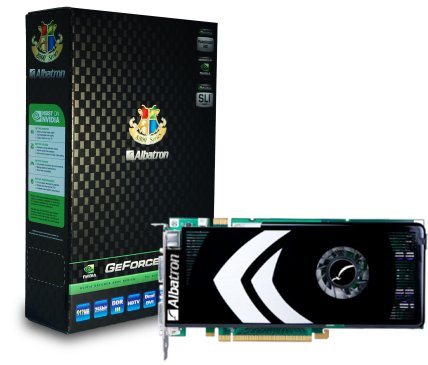 Latest GeForce 8 Series features included: PureVideo HD and PCI Express 2.0
There is no question that NVIDIA’s PureVideo HD is the premier Video Playback technology in the market. You almost have to compare it to other technologies to really appreciate PureVideo HD’s versatility and HD playback performance. There are not many others who can boast across-the-board VC1, H.264, MPEG2-HD (Blu-Ray, HD-DVD) support with the lowest CPU impact.

PCI Express 2.0 is one of the latest additions to the 8 Series family. Bit for bit, PCIe 2.0 boasts twice the data throughput (5 Gb/s) than its predecessor PCIe technology (2.5 Gb/s) and together with other new features on this card, significantly makes a big impact on performance.

New Technology: Lower Power Consumption, Cooler Temperatures, Performance Increase
One of the most exciting aspects of this card is the introduction of 65 nm Process Technology that has been designed into the GPU. This compact circuitry guarantees lower power consumption leading to cooler temperatures. The cooler temperatures, in effect, allows for the use of quieter and thinner fans. Subsequently, thinner fans mean that the card’s overall thickness will not encroach on adjacent expansion slots like other enthusiast cards. In addition, more compact circuitry also means shorter distances for the data to travel, increasing GPU performance. The GPU is an NVIDIA GeForce 8800GT with a core clock of 600 MHz.

Stream Processor Overclocking: Fast, Faster, Fastest
Modern games are inherently very shader intensive and this board allows the ability to overclock that part of the GPU that concentrates on shader processing. The Stream Processor Overclocker (SPOC) does just that, allowing the stream processor clock to be adjusted without overclocking the entire GPU, which results in highly optimized performance.

DirectX®10 and Shader Model 4.0: Fire, Smoke and Water
Amorphous objects like Fire, Smoke, Water and Hair have been formidable obstacles that gaming designers have been grappling with to attain realistic detail without compromised performance. With the 8 Series DX 10 implementation, NVIDIA has concerted much effort with specialized technologies including „Volumetric Smoke“, „Skin Instancing“ , „Motion Blur“ and „Underwater Lighting“. It’s astoundingly realistic – but you really have to see it to believe it.

And how do you measure DX10 performance? The first DX10 benchmark utility is officially here (PT boats-Knights of the Sea) and the GeForce 8 Series VGA cards are already crowding the top of the charts, demonstrating NVIDIA’s DX 10 experience and leadership in the market.

The rest of the Specifications
This board boasts the latest memory technology, giving users 512 MB of fast GDDR3 memory (1800 Mhz). The panel connectors include two DVI connectors and an HDTV-out connector. It supports Dual-Link HDCP and is SLITM ready. The board itself is 9″ in length and has a PCI Express x16 connector (PCIe 2.0).

8800GT-512: It’s the best performance card that money can buy
The Albatron 8800GT-512 is a perfect blend of the feature advantages from each of the GeForce 8 series cards that have come into the market over the last year. Add in the latest GPU circuitry technology, put an attractive price tag on it and you’ve got a VGA card that is destined to be an industry mover-and-shaker.