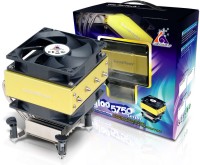 27 November 2007 – GlacialTech® a world class provider of cost effective cooling components and chassis launched the latest IGLOO 5750 PWM CPU cooler and IGLOO 5750 Silent CPU Cooler for both Intel LGA775 Socket CPU’s and AMD 754, 939, 940, AM2 & F Socket CPU’s. The unique design for the enthusiast incorporates a specially aligned aluminum heatpipe combination of four pipes that dissipate the heat from the CPU directly into the heatsink fins. From there, the Silent version’s double fan quietly and efficiently brings the temperature down. The low decibel (19dB), high volume (30.8 CFM) fans are 92mmx92mmx25mm and run at an ultra-quiet speed of 1800 RPM. The dual fan is a unique concept that not only cools down the radiator, but the added blow down effect also cools down the heatsink directly above the CPU. 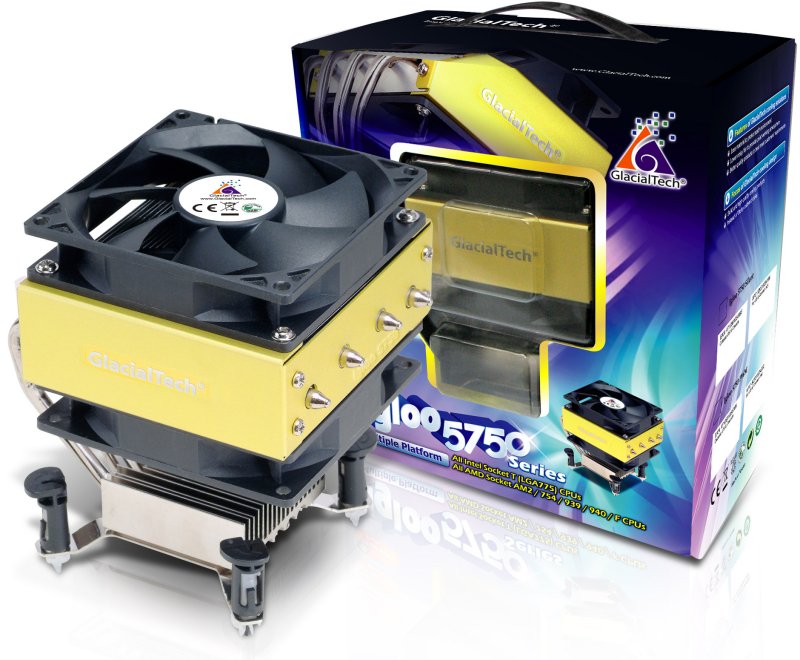 Unlike the Silent version of this series, the PWM version has a dual 92mm×92mm×25mm adjustable speed fan setup
which brings the temperature down according to your needs, The fan ranges in speed from 800~2500RPM, with a maximum
volume throughput of 51.3CFM. The Fan puts out 34dB maximum at full revolutions. The entire heatsink (both versions) keeps
a relatively low profile and only weighs in at 507grams, making it safe and light enough to pose no danger to your Intel CPU.
(Designed to comply with weight regulations of 550 grams on Intel CPU’s)

With today’s power hungry computers, GlacialTech has implemented a cost effective and useful way to keep your
processor cooled. When doing resource hungry applications and you have the PWM version installed, turn up the RPM to 2500
to manage your heat dissipation more effectively. While the PC is in idle or doing non-intensive work, turn the RPM back to 800.
In this way you manage your power consumption, your decibels and your overall peace of mind. Alternatively users have the
option to purchase the Silent version; GlacialTech gives you the variety and options to suit your needs. 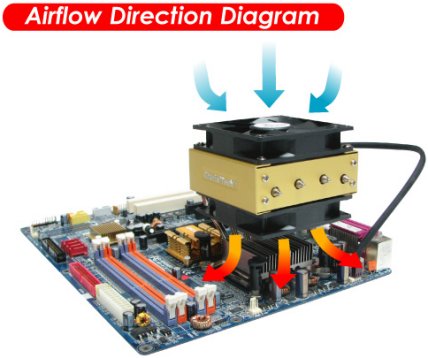 Heat is drawn up from the CPU into the CPU heatsink. The copper
heatpipes draw the heat further into the aluminum radiator fins. Cool air is
propelled into the aluminum fins from the top fan, extracting the heat from
the metal as it goes through. The second fan propels the air further, which
has been slowed down slightly by this time because it has increased in
volume. The second fan thus speeds up the airflow, thrusting it directly
onto the CPU heatsink. The combined wind cooling effect and heat transfer
adds increased efficiency to a rock solid design.

In addition the IGLOO 5750 PWM & IGLOO 5750 Silent supports either AMD or Intel processors; allowing you plenty of versatility in this world of forever changing technologies. 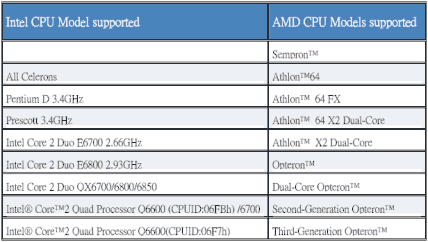 As a total thermal solution provider, GlacialTech® is committed to bringing increased value to customers in a quiet working
environment. The IGLOO 5750 PWM and IGLOO 5750 Silent are the next step in your evolution to an ultimate light weight, low
cost CPU cooler for your system.

As a total thermal solution provider, GlacialTech® is committed to bringing increased value to customers through the creation of
light weight cost effective systems, and a quiet working environment with an optimal price performance benefit.