March 18, 2008 – Albatron has „Enthusiastically“ announced the dual GPU 9800GX2. Two heads are better than one as SLI pundits have proven, but with the 9800GX2, you don’t have to fumble with manipulating two cards into your case. The 9800GX2 has two GPUs tucked into a sleek black case with a single PCI-e 2.0 slot connector. In addition, this card features the latest 65 nm technology assuring the highest processing efficiency, lowest power consumption and the most optimal 3D gaming performance and HD Video playback. The latest suite of NVIDIA features – No worries! 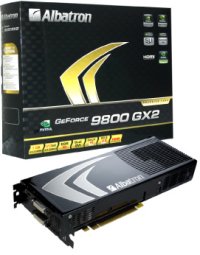 Have no worries about the latest NVIDIA features. This card is brimming with the most recent suite of NVIDIA technologies including PureVideo® HD, Unified Architecture, HybridPowerTM, full Microsoft DirectXTM 10 and Shader Model 4.0 support, and more!

Top-to-Bottom HD Video Ready – HDMI connector, Dual-link DVI w/ HDCP
Is this card HD ready or what? The 9800GX2 has an HDMI connector which can pass pure uncompressed high-definition video and audio to your HD monitor. But, if HDMI doesn’t fit into your plans, this card also provides Dual-link DVI connectors with HDCP compatibility. Dual 400 MHz RAMDACs can also support dual QXGA displays with refresh rates up to 2048×1536 @ 85 Hz! Simply said, this card provides the smoothest game-play at the most extreme HD resolutions, up to 2560×1600 – not to mention the highest quality Blu-ray playback with PureVideo HD, the premier HD video playback technology in the market.

Quad GPU in SLI mode – Ultra-Enthusiastic are you!
The 9800GX2 sports an SLI connector which means that you can be an Ultra-Enthusiast, installing two and getting quad GPU power and performance! NVIDIA’s Quad SLI® Technology implements a 4-way Alternate Frame Rendering methodology to efficiently optimize quad GPU 3D graphics performance and game-play.

Albatron 9800GX2 – Two heads are better than one
The 9800GX2 is the best Dual GPU solution without the hassle of buying and installing two SLI cards. With the latest 65 nm technology and HD Video features, this card is sure to jump to the top of the „Enthusiast“ class. 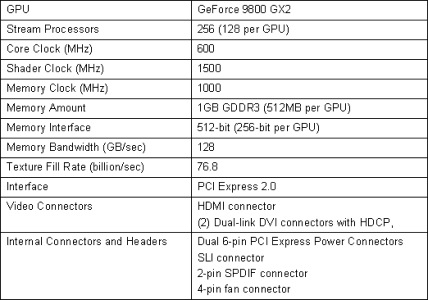