Now with more and more advanced relative technologies, the performance of video cards is getting stronger
and stronger, there will be more heat generated by video cards, which significantly impairs the life expectancy
of GPU and video memory chips on video cards. Video card companies have a lot of programs come and go
to solve the problem of heat dissipation. The most commonly seen in general is the use of fans with cooling
fins to do additional cooling. in the early days, the cooling job can be done simply with a fan or cooling fins,
but in today’s graphics cards with more intense heat than before, the cooling job must be done on the
technologies not the same as before, not just rely on the fan and cooling fins. Video card companies must go
to find some relatively new method to solve the problem of heat dissipation.

With a strong R&D team, SPARKLE introduced Diamonds Sputtering technology, which plate a Diamond-like
Carbon (DLC) membrane on the surface of video cards cooling fins to realize the cooling effects of DLC.
Diamond-like Carbon (DLC) membrane can help to quickly transfer the heat from GPU and video memory
chips to the cooling fins. SPARKLE R&D team found in the study that Diamond-like Carbon (DLC) which
gradually been found in the past few years has many high-natures, such as high optical penetrating, highchemical
corrosion-resistant, excellent friction properties and good compatibility. In addition, Diamond-like
Carbon (DLC) also has a high heat conduction. General heatsink is relies on the electronics movement within
the metal (such as copper) to do heat conduction. The diamonds do heat dissipation four times faster than
copper, it relies on the phonons which is produced by the crystal lattice vibration, to bring heat to lower
temperature places. Diamond-like Carbon (DLC) can achieve both functions at the same time, that is,
transferring heat to lower temperature places with both graphite metal bond and diamond insulation bond (the
covalent bond) . Apart from this, Diamond-like Carbon (DLC) can transfer carbon surface heat (atomic vibrations) into the infrared radiation of electromagnetic waves in bold (Black Body Radiation) , directly to the
air molecules. 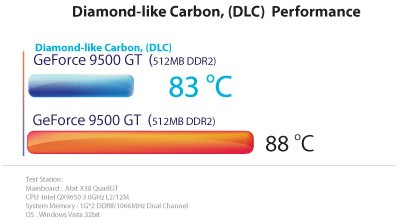