OCZ Technology Announces Availability of the Cryo-Z through Frozen CPU, Including Exclusive Adaptor Brackets for CPU Sockets LGA 1156 and 1366 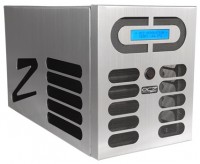 San Jose, Calif.—December 2, 2009 – OCZ Technology Group, a worldwide leader in innovative, ultra-high performance and high reliability memory and PC components, today announced the availability of the Cryo-Z cooler unit through its U.S. reseller partner Frozen CPU. Along with offering this affordable phase change solution to allow enthusiasts reach sub-zero temperatures when overclocking, Frozen CPU also includes its own unique customized mounting plate for CPU sockets LGA 1366 and 1156, for users to have a fully compatible cooler with their bleeding-edge systems.

“The Cryo-Z was developed for enthusiasts looking to push their systems further with affordable yet high performance phase change cooling,” commented Justin Shong, Senior VP of Sales for the OCZ Technology Group. “We are thrilled that Frozen CPU has taken our solution and made it even better with a custom mounting plate which extends the compatibility of this product to the latest CPU platforms, making the Cryo-Z even more of a total solution for enthusiasts.”

“We are thrilled to continue to breathe new life into the Cryo-Z with the addition of the Core i5/i7 compatibility,” commented Mark Friga Jr., President of FrozenCPU.com Inc. “We have found with our testing at our office as well as testing in the enthusiast community that the Cryo-Z operates perfectly on the latest chipsets from ATI and Intel featuring our new 1156/1366 hold-down collar. This gives the Cryo-Z the compatibility across many socket types and platforms that PC Hobbyist and Enthusiasts desire.”

OCZ Technology’s Cryo-Z is an advanced cooling solution for the extreme overclocker using phase-change technology to achieve sub-zero temperatures at the CPU. The Cryo-Z was developed with optimal user-friendliness in mind, including the insulation of the cooled parts as a necessary precaution against condensation. Thanks to the inclusion of Frozen CPU’s exclusive bracket adaptors and backplates, the Cryo-Z is now compatible with the latest platforms from Intel including “Lynnfield” and “Nehalem”, along with sockets LGA 775 and AM2 that are already standard with the Cryo-Z.

For extreme overclockers and computer enthusiasts looking to push their systems to the limit, you can purchase the OCZ Cryo-Z at Frozen CPU’s online store here.