Available now.... check it out 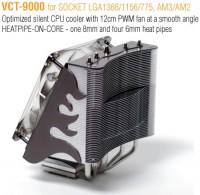 Anzeige
CPU coolers: heat pipes directly on the CPU core, SkiveTek and 3 types of ultra-thin fins
combined with a real silent PWM controlled 12cm fan at a 25 degree angle. This type op performance
has never been this quiet before. 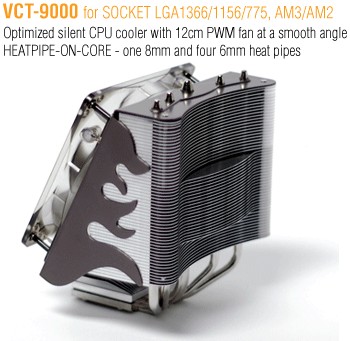 The 120mm fan is PWM controlled and the speed varies between an utterly low 500 and 1600 RPM
creating the lowest possible noise-output. Further more the fan is fitted with for blue LED’s.

The 5 heatpipes – one of 8mm and four of 6mm diameter – are fitted using the advanced Heatpipe-On-Core technology to guarantee the fasted heat dissipation possible. 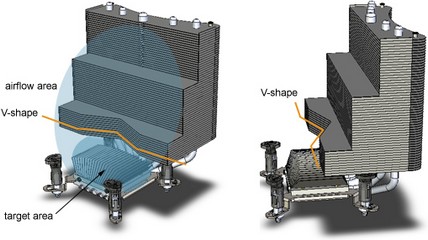 The Nexus VCT-9000 has 3 different shape aluminium fins. The bottom section of the fins
has a characteristic V-shape. This V-shape allows the air flow generated by the 12cm fan
to reach the target area on top of the CPU core for effective cooling.

When you compare this solution with side-blowing cpu coolers in the market you notice
that this area is not touched by the airflow of most of these models. A clear advantage
for the VCT-9000 compared to side-blowers. 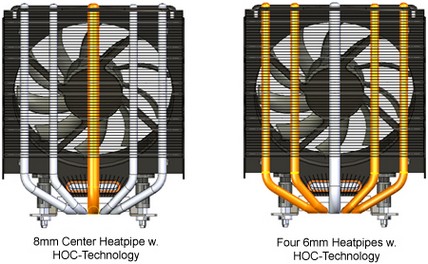 The Nexus VCT-9000 is equipped with five heatpipes. The center heatpipe which is directly
on the middle of the CPU is 8mm in diameter and provides massive cooling for the heart of
the CPU. On either side of the 8mm heatpipe there are two highly efficient 6mm heatpipes. 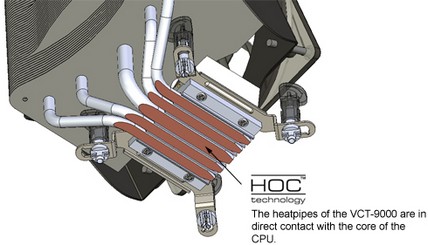