4 May 2010, Keelung, Taiwan – Lian Li Industrial Co. Ltd. today announces its brand-new TYR series – the PC-X900 mid-tower chassis. With the hair-line brushed anodized aluminum finishing and its intelligent multi-heat zone design, the PC-X900 fits perfectly in the living room as a home theater system, as well as proving a complete thermal solution to the gamers. Lian Li once again proves its dedications in bringing a convenient and stylish life with the cutting-edge technology and tool-less design to its customers worldwide. 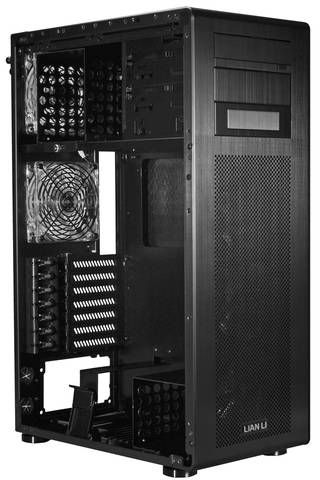 General Features
Dimensioned at 230 x 598 x 388mm (W.H.D.), the PC-X900 is a mid-tower chassis, an alternative choice between the smaller PC-X500 and the full-size PC-X2000 from Lian Li’s product line. Net weight at 8.22kg, it includes three 5.25″ optical drives, seven 3.5” hard drives separated in two cages, all with the patented tool-less design. Supporting ATX/M-ATX motherboards, the PC-X900 can hold video cards maximum of 300mm length, as well as occupying seven PCI slots and four USB 3.0 ports mounted on the top cover alongside one e-SATA HD audio port. The TYR PC-X900 is available in red, black and silver colors. 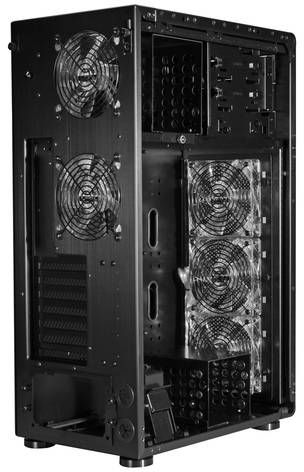 Easy Access & Spatial Design
The most convenient tool-less design is an important key feature for Lian Li’s cases in 2010. Power users’ requirements of building systems faster and swapping the components often have been taken into consideration. This is why the side panel of PC-X900 is transparent, and can be opened easily with the tool-less latch, the motherboard tray can be opened and CPU coolers are removable; the multimedia I/O ports are designed right on the top of the case; and the PCI add-on cards can be assembled effortlessly. When installing the 5.25” optical drive, users can simply slide the drive into the bay and close the mounting bar to secure.

The motherboard is positioned at the middle-level of PC-X900, allowing an easy access to the motherboard and more room for larger CPU coolers. There is also enough room for a 180mm long power supply at the rear of the case.

Cooling Fans & Thermal Solution
Lian Li’s PC-X900 has two heat zones design to have better thermal solution and tidy up internal space. Moreover, the PC-X900 features three and two 120mm LED fans at the front and rear of the case, respectively. The fans cover the whole motherboard so they bring in cold air and remove heat effectively. There are also vents on the PCI slots, providing extra cooling to the graphics cards. The power supply unit is at the bottom of the case so that it can draw cold air in directly through the vent below. Finally, there is a fan controller in the back of the case for users to adjust the fan speed and get the best balance between silence and cooling.