Founded in Germany, using Taiwanese Manufacturing expertise, the brand now has established branch offices around the globe to cater to gamers’ needs everywhere

Taipei, Taiwan – DECEMBER 23, 2011 – COUGAR, exclusive brand for high-end quality PC cases, power supplies and cooling fans, has been renown among demanding gamers for some time already. But until 2011 COUGAR had only been available in few countries. Now, COUGAR has announced that their global expansion with newly founded branch offices in all major territories around the world has been successfully initiated in 2011, effectively catering to gamers’ needs everywhere.

The award winning PC cases, power supplies and cooling fans are not only being appreciated by users, but also won accolades from virtually all major computer magazines and review sites, as well as being awarded design and innovation awards such as the Computex 2010 Award. For 2012, COUGAR is already nominee for the highly acclaimed industry design award Designpreis Deutschland 2012. All this demonstrates, that user orientation and listening to the needs from the enthusiast and gaming community is still a major driver of the entire IT industry and for COUGR in particular. 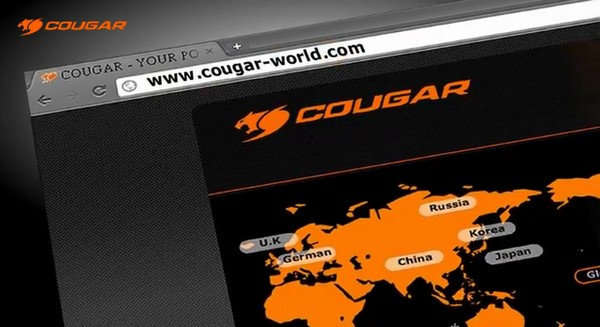 Therefore COUGAR is getting involved into the enthusiast and gaming communities stronger than ever, seeking for interaction directly with the users. Milestones in these efforts have been the newly established Facebook [http://www.facebook.com/cougarworld] presence as well as the COUGAR YouTube channel [http://www.youtube.com/cougarglobal], where users get insight straight from the horse’s mouth. In addition COUGAR is sponsoring games servers and co-conducting competitions such as the latest 3D Mark Overclocking completion [http://www.3dmark.com/competitions/MSI-OpOc/].

COUGAR has edited an exclusive video with more information and insights into the company’s design and production process as well as giving some sneak previews of upcoming brand new gaming products in 2012. You can see the video here on YouTube: http://www.youtube.com/watch?v=wjun3KNPjug

Lio Huang, Brand Manager at COUGAR points out,
„Over the past couple of years we have be expanding into several countries already, but particularly during 2010, when COUGAR won the Computex Design & Innovation Award, we felt once more motivated to double our efforts to offer our products around the world. Founded in Germany, utilizing Taiwanese manufacturing expertise, COUGAR now has branch offices in Germany, the UK, USA, Russia, China, Korea, Japan and Taiwan. For 2012 we expect this expansion to continue at the same pace.“