Give Me 5! Exclusive XFast 555 Technology
Not only focusing on developing rock-solid hardware components, ASRock also pay special attention on user-friendly software tools. All the innovative features of XFast 555 Technology are not specialties for the latest motherboards but can be implied on all series of ASRock motherboards.

ASRock OMG (Online Management Guard)
OMG is unique from ASRock! It allows you to establish an internet curfew or restrict internet access at specified times. Administrators are able to schedule the starting and ending hours of internet access granted to other users. Plus, it is a free tool for controlling internet access of each single PC. Parents can easily control internet access through BIOS setup to protect their kids from using Internet at inappropriate time, and meanwhile, enjoy their own internet space.

ASRock Internet Flash
Internet Flash is a user-friendly tool and searches for available UEFI firmware updates from ASRock servers. System can auto-detect the latest UEFI from our servers and flash them within UEFI setup without entering Windows® OS.

Select Your Overclocking Beast: Z77 Extreme9
At the very top end of ASRock’s Z77 segment is the Z77 Extreme9. At first glance, you will be definitely charmed by its shining LED heatsink design. The board was extraordinary dominated by a fancy LED heatsink design which represents advanced users’ unique taste of motherboard preference. In addition, the metallic and minimalism look of the package brings the atmosphere of technology; the stylish brushed aluminum heatpipe design also ensures its effective heat dissipation. 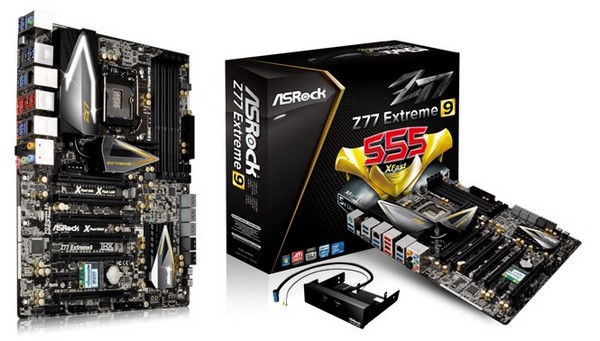 The Most Compact Mini Mobo To Date: Z77E-ITX
Small size, huge performance. ASRock Z77E-ITX is a well-built motherboard and packs to the gills with features. There’s a remarkable mSATA connector onboard. The mSATA connector can be used to connect a Solid–State Drive (SSD) for an internal storage device. Coupled with SSD and HDD, users are able to take advantage of Intel Smart Response Technology and enjoy smart caching performance easily. The board also comes with an exclusive WiFi module that supports WiFi 802.11 b/g/n connectivity standards. Users can easily create a wireless environment with ASRock WiFi-supported motherboard. 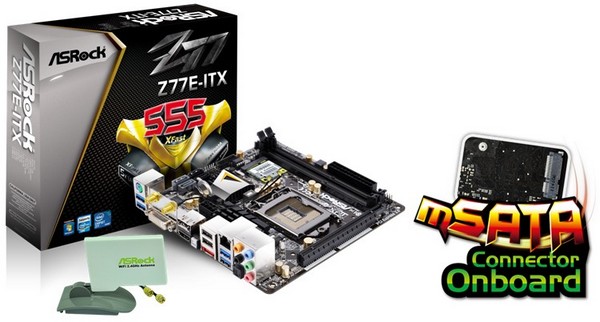 World’s 1st & Only H77 MB Supporting Virtu MVP: H77 Pro4/MVP
Special introduce here is the H77 Pro4/MVP motherboard. Based on the Intel H77 chipset, this board is unprecedentedly able to support Lucid Virtu MVP technology. Designed for perfect gaming, the board was equipped with top-tier specifications, such as Digi Power, Multi-VGA display (D-Sub, DVI-D and HDMI), 7.1-CH HD Audio with THX TruStudio and On/Off Play technology. ASRock H77 Pro4/MVP comes with extinct features and rich packages; you don’t have to spend a fortune to get a stunning rig! 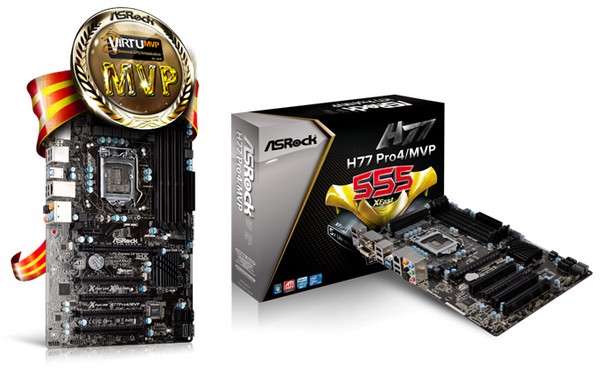 Fatal1ty Z77 Professional was designed to exceed the expectations of even the most dedicated gamer. With Z77 Professional, 100% precise Fatal1ty Mouse Port technology and all-in-one tuning program F-Stream; you will take your gaming to a whole new level. Fatal1ty Z77 Professional-M is the first Micro ATX Fatal1ty gaming motherboard. The board brings ultimate performance and high-end specifications that is able to satisfy all gamers who want to have small chassis. Designed for budget gamers, Fatal1ty Z77 Performance comes with everything essential and helps gamers to rule their own gaming path!