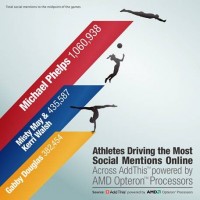 LONDON – AUGUST 7, 2012 – With 1,060,938 social mentions through Sunday, the first graphic shows that American swimmer Michael Phelps is the most popular athlete in social media discussions online mid-way through the 2012 Olympics, as evidenced by the amount of social shares according to data from AddThis. AddThis is the world’s largest social sharing platform used by over 14 million web domains and reaches 1.3 billion people each month. Following Phelps in social mentions with the Silver are the American beach volleyball team of Misty May-Treanor and Kerri Walsh Jennings with 435,587 and the Bronze goes to American gymnast Gabby Douglas with 382,454. 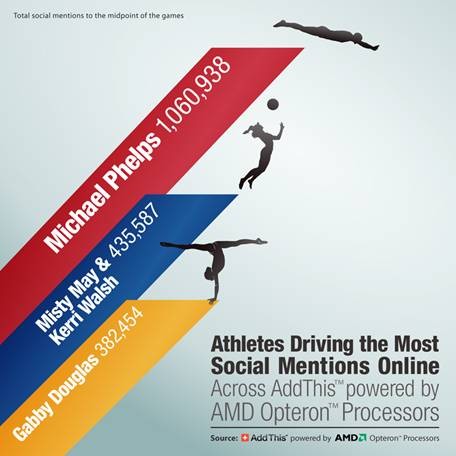 The second graphic shows which athletes have seen the greatest percentage increase in social mentions comparing the week before the games to the midpoint based on data from AddThis. It’s Gabby Douglas who has soared to the top position with an astonishing 24,979 percent increase. She is followed in the Silver position by fellow gymnast Jordyn Wieber with an impressive 13,457 percent increase with Misty May-Treanor and Kerri Walsh Jennings earning the Bronze with a 13,032 percent increase.

AddThis provides the sharing platform that is found next to most online content enabling people to post or link back through all of the most popular social media sites. The company uses 1,000 servers powered by AMD Opteron™ processors to manage the high volume of web traffic and data.