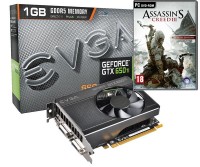 09 October, 2012 – If you’re passionate about first-person shooters like Call of Duty, massively multiplayer online games such as World of WarCraft, or real-time strategy games like StarCraft II, then GeForce GTX is for you. Turbocharge your experience with the powerful performance of the EVGA GeForce GTX 650 Ti and enjoy the latest games in full 1080P HD with this next-generation NVIDIA Kepler architecture-based GPU.

EVGA will be offering four versions of the GeForce GTX 650 Ti. This includes a standard and SSC version, as well as 1GB and 2GB models. Please also note that both of the 1GB versions will be bundled with a free key for Assassin’s Creed III* that can be redeemed once the game launches. 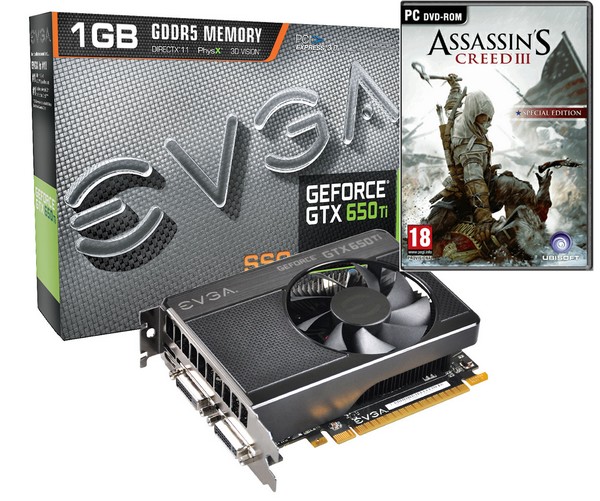 In addition to EVGA Precision X, EVGA is also making available a new version of EVGA OC Scanner X, now compatible with the EVGA GeForce GTX 650 Ti. This application is free and supports the following features, and more.

The EVGA Difference
Known for offering value and performance, as well as exemplary customer service, EVGA is recognised through customer loyalty and the highest levels in customer satisfaction. In addition to the expanded product lines, consumers and channel partners will also benefit from increased sales and technical support programs:

EVGA proprietary Advanced RMA (EAR) service – to enable customers to get a replacement card before sending the defective product back to EVGA.

Step-Up Program – for the ability to trade up existing EVGA products for newer technology.

*Designed from the ground up over more than two years, Assassin’s Creed III takes one of gaming’s most beloved franchises to new heights. Find out more here.

EVGA was recently awarded the top accolades in the industry-recognized PC Pro Excellence Awards 2012 – in both the Graphics Cards and Motherboards Categories: