The ‚GIGABYTE Winter OC Whiteout‘ starts today, running until January 20th 2013 and is open to all overclockers using any Intel® processor on any compatible GIGABYTE motherboard. The competition centers around three key stages, each containing a 3D benchmark with specific limitations imposed to level the playing field. A GIGABYTE Z77X-UD4H motherboard plus, a Cooler Master Seidon 120M liquid cooler will be awarded for the winner of each stage. 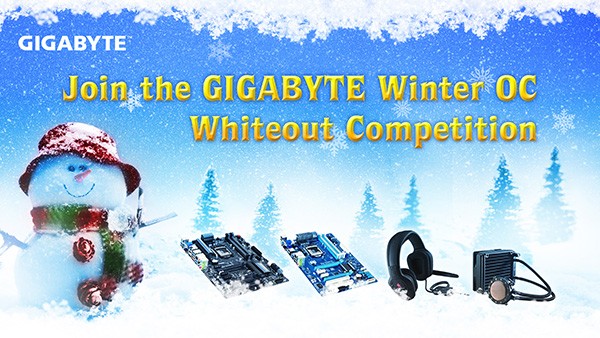 Bonus Stage: Show us Your Winter Wonderland Submission Photos
As a special bonus, the ‚Winter OC Whiteout‘ will also offer a prize for the submission photo that most creatively inspires the festive spirit. So make sure to snap your submission photo when your LN2 pot is at its absolute snowiest.

On January 10th 2013, the ten snowiest and most festive submission photos will be added to the GIGABYTE Motherboard Tech Column Facebook page. The photo that receives the most Facebook ‚likes‘ by midnight on January 20th 2013, claims the prize. The bonus winner will receive a GIGABYTE Z77-HD4 motherboard plus a Cooler Master Sirus S-5.1 gaming headset.

The ‚Winter OC Whiteout‘ contest will run from December 21st 2012 with final score submissions and Facebook ‚Likes‘ until midnight on January 20th 2013.