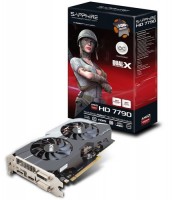 SAPPHIRE Technology has just introduced the first in a new family of products in its highly successful HD 7000 series of graphics cards. The SAPPHIRE HD 7790 OC is based on the latest chipset featuring the highly acclaimed graphics GCN (Graphics Core Next) architecture from AMD and sets a new standard for performance in mainstream graphics.

The SAPPHIRE HD 7790 OC Edition is the first product in a new family featuring the latest GPU architecture from AMD with 896 Stream processor units. It has 1GB of the latest GDDR5 memory and is factory overclocked, with core clocks of 1075 MHz and memory clocks of 1600 MHz (6.4 GB/s effective), to deliver new levels of performance in its price segment. Performance is optimised with the latest version of AMD’s PowerTune technology. Quiet and cool operation is assured with SAPPHIRE’s Dual-X cooler design, which combines a multiple heatpipe array with two aerofoil section fans and dust repelling bearings resulting in a highly efficient and reliable cooler. 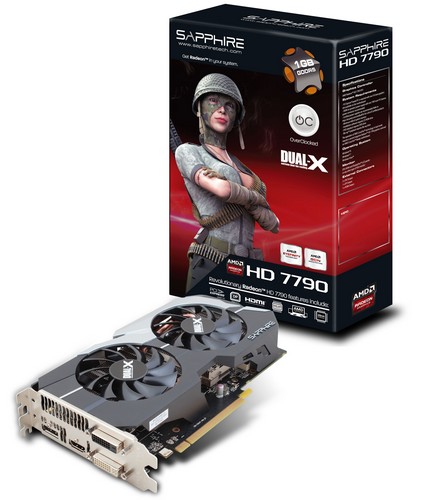 The SAPPHIRE HD 7790 OC Edition can be installed in any PC with a free x16 PCI-Express slot, and communication with the host PC is optimised with the use of the latest high speed PCI-Express Gen 3.0 interface. Built in hardware support for AMD CrossFire™ enables multiple cards to be used to further enhance performance in a suitably specified mainboard.

The SAPPHIRE HD 7790 OC supports the latest industry standards and is ready for Windows 8 with its architecture designed for DirectX® 11.1, OpenGL 4.2 and OpenCL 1.2. This latest version of AMD’s Graphics Core Next (GCN) architecture also supports an unparalleled array of display and audio technologies, with new fast HDMI features (such as support for 4K resolution and full frame rate 1080p stereoscopic support), DisplayPort 1.2 certification (with support for Multi-Stream Transmission), and DDM Audio (which adds supports for up to 6 simultaneous independent audio streams). Video capabilities include native support for 3D Blu-ray (MVC Codec), DivX decode and hardware encoding of H.264 video via VCE. 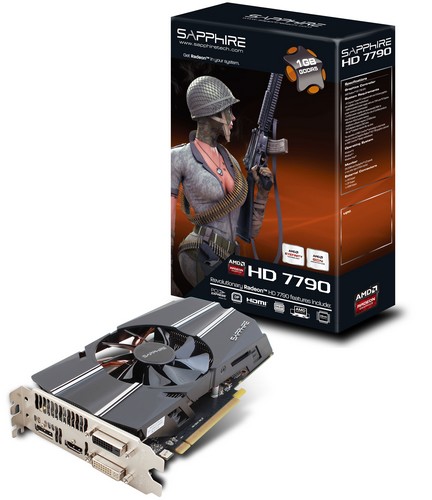 Working or gaming with multiple monitors is becoming increasingly popular, and the SAPPHIRE HD 7700 series supports this with AMD Eyefinity, now in its second generation. The SAPPHIRE HD 7790 OC Edition has two DVI ports (DVI-I and DVI-D), HDMI and a single DisplayPort output, supporting up to four monitors.

The SAPPHIRE HD 7790 OC Edition model supports the FleX feature, pioneered by SAPPHIRE, that allows three digital displays to be connected to the DVI and HDMI outputs and used in AMD Eyefinity mode without the need for an external active adapter. All four outputs can be used in AMD Eyefinity mode, but the fourth display must be a DisplayPort monitor or connected with an active adapter.

SAPPHIRE will also introduce the HD 7790 1GB Standard Edition, sharing all the same features as the OC model, but with the slightly lower clocks of 1000 MHz for the core and memory clocks of 1500 MHz (6 GB/s effective). The HD 7790 1GB has a SAPPHIRE original cooler with dual heatpipes and a single fan, and the same output configuration as the OC model.

APP Acceleration is the name given to the enhanced performance of a wide range of applications using the stream processing capabilities and specific hardware features of the GCN graphics architecture. The HD 7000 series has been optimised for this type of task. Typical applications include Video encoding and decoding, compression and multiplexing for media distribution, gaming or video conferencing. APP acceleration can also enhance everyday tasks such as Internet browsing, Office applications and file compression with supported software suites.

Target on-shelf date for products based on the AMD Radeon™ HD 7790 is 02 April. Channel customers may start selling product on this date.