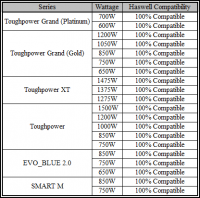 Taipei, Taiwan – May 21, 2013 – Intel has just introduced the new 4th generation Intel Core processors, code-named “Haswell”, the new technology for reducing power consumption of the CPU in sleep mode. The new C6 and C7 states are able to reduce the CPU power consumption to just 0.05A (0.6W) while previous Ivy Bridge processors draw up to ten times more minimum power. As this resulting from the deep sleep state, when most other 12V devices are either turned off or in low power state, this significantly decreases the 12V load on the power supply.

Thermaltake, being an industry leader in computer chassis, thermal solutions, and power supply units announces the latest news that most high-end power supplies of Thermaltake are fully compatible with Haswell CPUs. All current high-end and mainstream PSUs from Thermaltake are already prepared for the new Intel processors to deliver stable voltages to achieve maximum energy savings.

Models compatible with Haswell from Thermaltake: 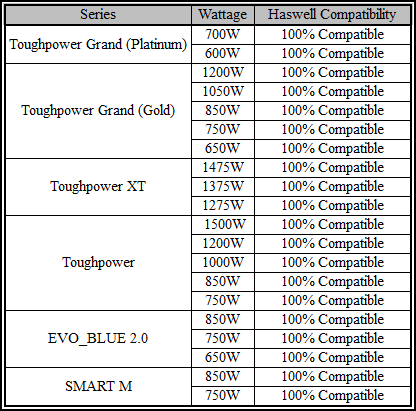