ROCKI World’s First Wifi Music System for Every Phone, All Speakers and Everyone

25 November 2013, New York – The cofounder of the extremely successful smartwatch Omate TrueSmart is now revolutionizing the music world with the first Wifi music system for every phone, speaker and everyone! The futuristic and extremely affordable ROCKI is preparing to change the way people enjoy music at home. Today highlights the official launch of ROCKI on the world’s number one crowd funding website Kickstarter.com.

ROCKI To all speakers – Instead of building just another wifi speaker, the ROCKI team has a bigger vision: ROCKI wants to transform every speaker system into a Wifi music system, whether it is old or new. The ROCKI PLAY is a clever little device that plugs into the audio input of any speaker system, and immediately transforms it into a wifi enabled speaker, ready to rock your music wirelessly from every phone. 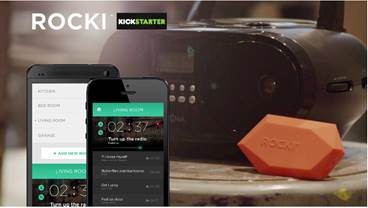 ROCKI From every phone – The smartphone is rapidly becoming the window and remote control to everyones world. The free ROCKI App does just that for your digital music: Search and select any song, control volume and playback and play your music to any ROCKI enabled speakers. The App is available for every smartphone including Android, iOS and an HTML5 edition for Windows Phone, Sailfish, Ubuntu and more. The HTML5 edition also enables PCs running Windows / Mac / Linux to enjoy the ROCKI possibilities via any web browser. Designed for everyone, ROCKI App is built with simplicity in mind. All music will be accessible at a simple touch on the phone and played to all or any of your ROCKI’d speakers anywhere in the home.

ROCKI For everyone – Simple and affordable. The ROCKI system will revolutionize your music listening experience at an affordable $49 each. One for every speaker set in your home, one in every room. Simply plug the ROCKI PLAY into your speakers, start your ROCKI App on your phone and press play.

ROCKI Wifi – Most wireless audio solutions work with Bluetooth, a technology designed to exchange data over short distances, not for high quality music enjoyment. That’s why ROCKI uses wifi, a commonly available technology that utilizes radio waves for wireless connections. The same radio waves your parents used to listen to good old radio! Wifi enables ROCKI to transmit the highest quality audio, including lossless formats like FLAC, at a greater distance. Walls are no limitation and ROCKI supports multiple users playing music to multiple speakers in many rooms at the same time.

ROCKI Supports existing protocols – The ROCKI system supports UPnP for ROCKI to easily integrate into an existing wifi music network. Most of these setups however lack the plug & play simplicity that make it accessible to everyone. The proprietary ROCKI API adds a layer that’s designed with user friendly multiroom music in mind. Catering for both the superuser and the regular consumer, ROCKI achieves the best of both worlds ROCKI for everyone!

ROCKI Frees your music! – With the rise of streaming services, The Internet has enabled a new type of listening experience that’s now massively embraced by many music lovers. Unfortunately speaker system haven’t kept the same pace: There is a disconnection. People are left to listen to music on their phones with headphones, fixing their phones to their stereos with cables and other annoying difficulties, simply to get your music on your speakers. ROCKI bridges that disconnect and frees all your music allowing it to jump out of your phones into all speakers everywhere in your home. Music deserves its space Free your music!

“We’ve started the ROCKI design and development since February this year, focusing our expertise and efforts on simplicity. A three continent collaboration between key members in USA (New York), Europe (The Netherlands), and China (Shenzhen) with the cream of the crop in music and technology business. A truly global team with team members of 11 nationalities USA, Canada, The Netherlands, UK, France, Portugal, China, Taiwan, Singapore, Australia and New Zealand.”

“With our extensive experience and global view of the music and streaming landscape, we’ve seen other wifi speakers, but we’ve never found one system that is: Simple, affordable, works with all speakers, all smartphones. And then we injected a dose of ROCKI passion, because music is passion. Come join us, free your music” says Nick NM Yap, CEO & Founder ROCKI.

Help kickstart ROCKI, support ROCKI on Kickstarter for only $49 for each ROCKI PLAY.

ROCKI ships to Kickstarter Backers in two batches in December and January. Developers are invited to maximize the ROCKI system with the open UPnP and the ROCKI API which will be available on request.

ROCKI From every phone, To all speakers, For everyone. Free your music!