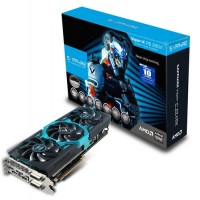 SAPPHIRE technology, the leading manufacturer and global supplier of AMD-based graphics products, has just added another new model to its highly acclaimed VAPOR-X family of graphics cards in the successful R9 series. The SAPPHIRE R9 290X VAPOR-X OC features several of the company’s industry-leading technologies and a factory overclock to deliver best in class performance with very low noise.

Based on the award-winning Graphics Core Next (GCN) architecture from AMD with 2816 Stream Processors, the SAPPHIRE R9 290X VAPOR-X is an overclocked edition which boasts 4GB of the latest GDDR5 memory running at 1.410 MHz (5.64GB/s effective) and high speed engine clocks of 1.080MHz. Together these clocks deliver industry leading performance – but to achieve this performance with stability and reliability demands high quality components throughout the design (especially in the power control circuitry) together with a sophisticated cooling solution. 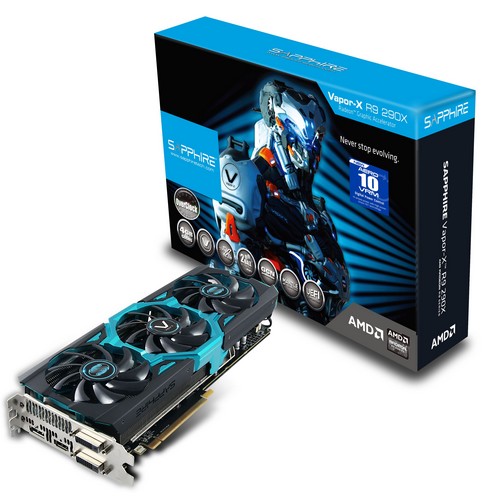 SAPPHIRE Innovations
The advanced cooling system for the new SAPPHIRE VAPOR-X series has been engineered with a combination of SAPPHIRE innovative technologies to provide not just efficient cooling, but also quiet operation. At the core of the cooling system is the SAPPHIRE exclusive VAPOR-X technology. SAPPHIRE pioneered the use of Vapor-Chamber technology on graphics cards and has now used it in several generations of highly successful products. The Vapor-Chamber is mounted between the GPU itself and the base of the heatsink and cooler assembly to ensure the maximum transfer of heat away from the GPU into the cooler.

The new VAPOR-X cooler uses SAPPHIRE’s latest and highly acclaimed TRI-X structure comprising five heatpipes and three efficient fans. The core heatpipe is an industry leading 10mm pipe, flanked by two 8mm pipes and two 6mm pipes ensuring even heat distribution across the cooler. The three 90mm fans use aerofoil section blades for maximum airflow with minimum noise, and are each equipped with two sets of dust repelling ball bearings. The stylish fan shroud also contains moulded guides to control the airflow across and through the cooler, including over the power control circuitry. The combination of VAPOR-X and TRI-X technologies results in GPU temperatures between 5 and 10 degrees cooler than with TRI-X alone – delivering industry leading cooling for this generation of graphics cards.

Another new feature of the cooler on this new model is a PCB component heat spreader. Along the edge of the card the PCB is extended and one of the copper layers left exposed. An additional heatsink mounted directly to this copper layer allows heat absorbed into the PCB from the GPU and other components to be transferred to the heatsink and cooled by the airflow. This feature alone can reduce core temperature by several degrees.

New VRM Engine
To deliver sufficient power for maximum performance, the VAPOR-X series uses Digital Power Control and a new Aero10 VRM section delivering 10-phase power with high power Direct-FET technology to the GPU, memory and control circuitry. The power design uses the latest version of SAPPHIRE Black Diamond Chokes, so called because they feature a black ferrite cooler for cool running and better efficiency. High reliability solid electrolyte capacitors are used throughout. The Aero10 gets its name because the layout of the 10-phase power circuits, chokes and the dedicated FET cooler resembles the appearance of a high performance engine.

Recognising that the R9 series will not always be running at high performance, SAPPHIRE has incorporated another new feature in the VAPOR-X models, Intelligent Fan Control (IFC). With IFC engaged, if the system is running simpler applications such as 2D work or watching video, only one of the three fans will operate, resulting in near silent operation. As soon as the GPU temperature rises, when performing more demanding tasks such as gaming or 3D rendering, all three fans will operate, and continue to run with fan speeds regulated by the temperature profile. Extreme users or keen gamers might want to have all three fans running all the time, so the card is equipped with an IFC override switch.

How cool is that?
The user has a simple visual indication of the temperature of the card as the colour of the LED illuminated SAPPHIRE logo on the side of the card will change from blue when cool, through yellow and on to red when running hot.

Universal Compatibility
The SAPPHIRE R9 290X VAPOR-X is equipped with a Dual BIOS – so at the touch of a button it can be switched between compatibility with the latest UEFI or for use in legacy based systems. For optimum performance this card should be used in a mainboard with PCI Express Gen3.0 expansion slots. Multiple cards can be used in AMD CrossFire™ in a compatible mainboard.

Latest Displays
The SAPPHIRE R9 290X VAPOR-X is equipped with Dual DVI-D, High speed HDMI 1.4a and DisplayPort 1.2 outputs enabling it to support the latest digital monitors. It is ideal for use with three monitor Eyefinity set-ups, with no active adapter needed, or up to five displays in total, as well as with the latest high resolution 4K displays.

The SAPPHIRE R9 290X VAPOR-X is shipping now and will be available from the usual SAPPHIRE etailers and retailers.