Singapore, May 28, 2014 – Strontium, a leading digital storage brand from Singapore, today launched its finest and fastest range – the ultra-high speed Nitro Plus, in Singapore. The much awaited range of products by Strontium consists of UHS-I Speed Class 3 (U3) SD and microSD cards, which enable consumers to capture and watch 4K2K Ultra HD pictures and videos on their high performance cameras, tablets and smartphones.

Strontium Nitro Plus UHS-1 Class 3 cards guarantee performance of up to 80MB/s read and 60 MB/s write, enough bandwidth to allow users to capture cinema quality Full HD (1080p), Ultra HD (2160p), 4K2K and 3D videos on their DSLRs and camcorders and then play them on their UHD TVs, laptops and smartphones with stunning colors and clarity. Users can capture up to 2 hours of 4K2K HD video on a 128GB SD card. In addition to 4K2K video capture, Nitro Plus cards can also be used for burst or continuous mode photograph capture and television recording. The faster transfer speeds also reduce the time needed to download large movie and music files to smart phones and tablets. Moreover, all NITRO PLUS cards are waterproof and shockproof, and come with Strontium Lifetime Warranty. The microSD version also comes with the finest Android Backup Application – MyBackup Pro Full Version worth SGD 6.33. 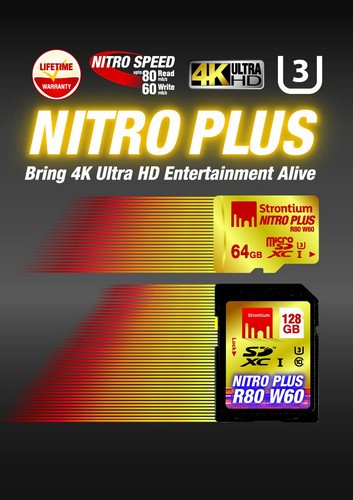 “We are proud to announce the launch of our flagship Nitro Plus range of finest memory solutions to Singapore market. More and more devices in 2014 such as TVs, cameras and smartphones are coming with 4K2K Ultra HD support and need storage capable of high-resolution recording and playback. With the Nitro Plus series, everyone can easily capture those incredible high quality images and videos and then playback on their UHD TVs and smartphone. These are an excellent storage choice for those parents who enjoy filming their children and don’t want to miss that perfect shot, for sports enthusiast who like to record sporting events, and for professional photographers who rely on consistent performance,” said Mr. Vivian Singh, President and CEO Strontium Technology.