AMD AM4 Motherboard Joins the Race to the Future

February 17th, 2017 Taipei, Taiwan – BIOSTAR is proud to announce the newest entry in its RACING Series family of high-performance motherboard with its debut entry for AMD with the BIOSTAR RACING X370 and B350 motherboard line up. Featuring the latest 2nd-generation RACING Series technology, the race to the future has just become more intense with support for the new AMD RYZEN processors. True to the legacy of the BIOSTAR RACING series, the new motherboards for the Super 5 concept as well as the BIOSTAR’s revolutionary VIVID LED Armor and 5050 LED Fun Zone. In conjunction with this are BIOSTAR’s new improvement to component stability and performance with its new feature of Digital Power+ for overclocking and M.2 Cooling Protection. Also debuting with this model is the FLY.NET network performance software that works in tandem with the new DRAGON gaming LAN solution designed for gamers that want absolute network performance without lag when every second counts. 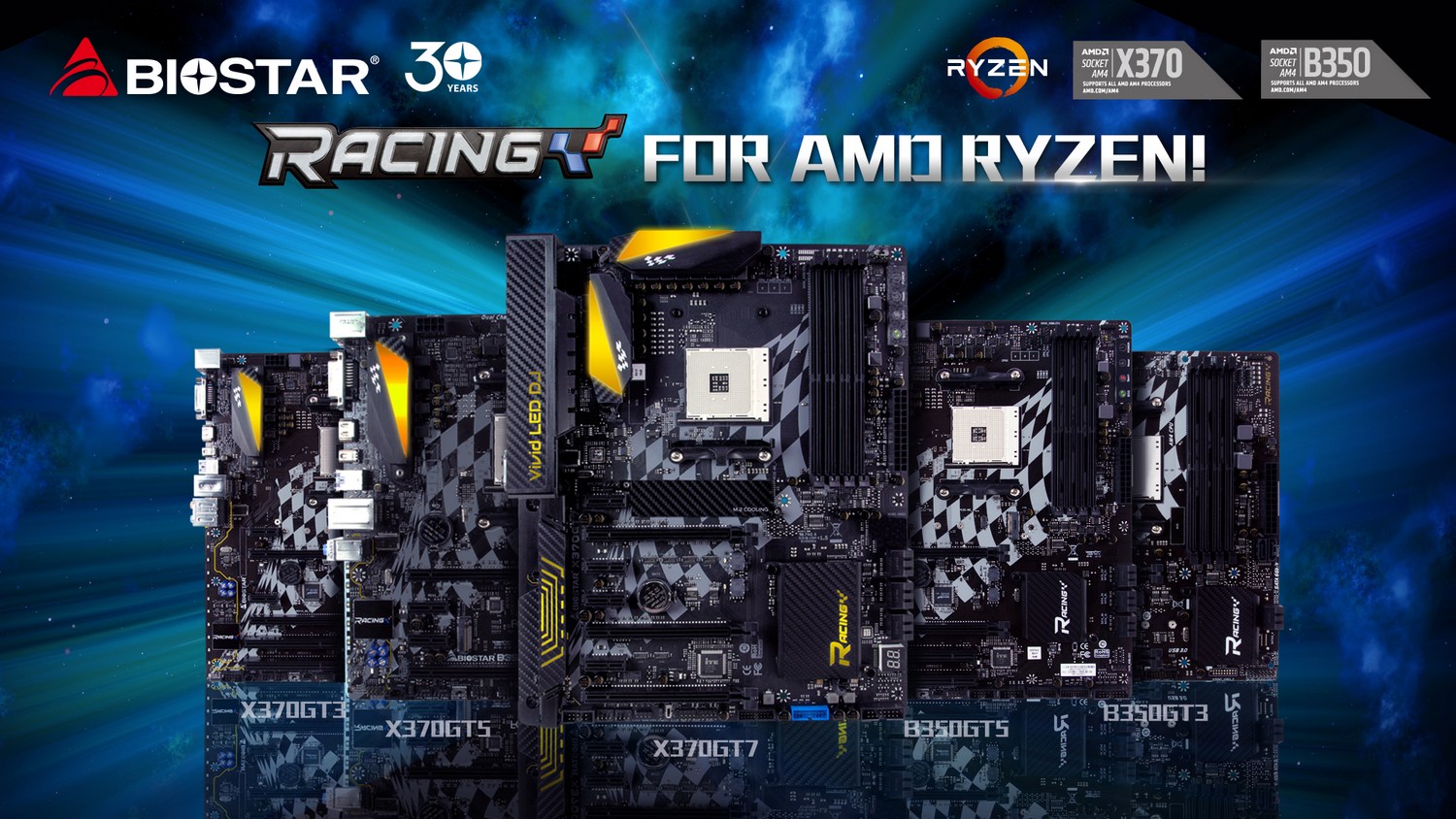 RACING X370GT7
The flagship AM4 motherboard for the AMD RACING Series lineup supporting AMD RYZEN processors, the BIOSTAR RACING X370GT7 features all the best technologies from the RACING Series. Featuring support for AMD Socket AM4 processors and up to the latest DDR4 memory, the X370GT7 is the next-level of AMD platform performance. Exclusive to the BIOSTAR RACING series boards, the X370GT7 features M.2 Cooling Protection for optimal performance of SSDs in the most intense situations. 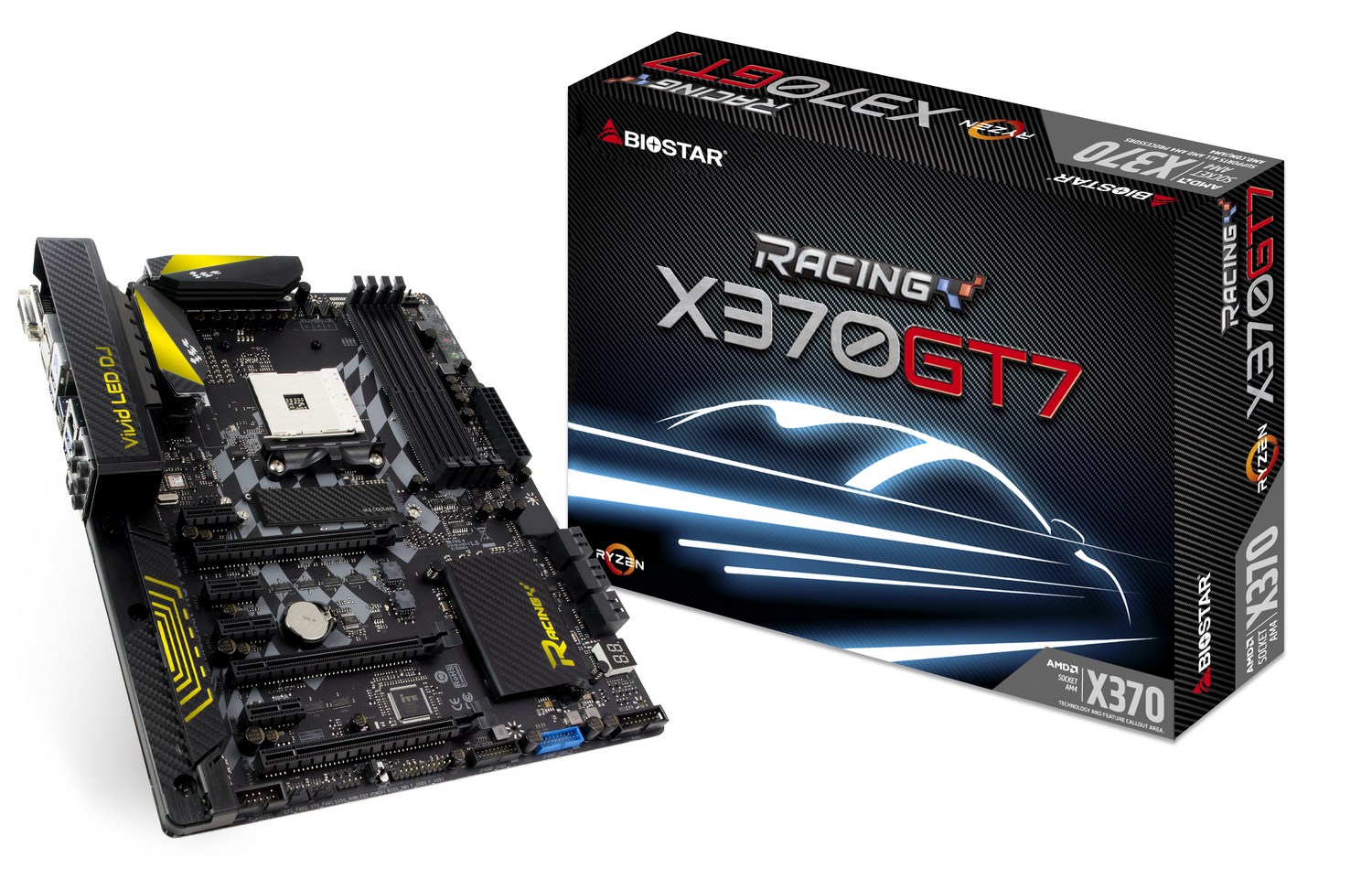 The BIOSTAR RACING X370GT7 motherboard will be offered with a special bundle and will come with a BIOSTAR M200 M.2 240GB solid-state drive. 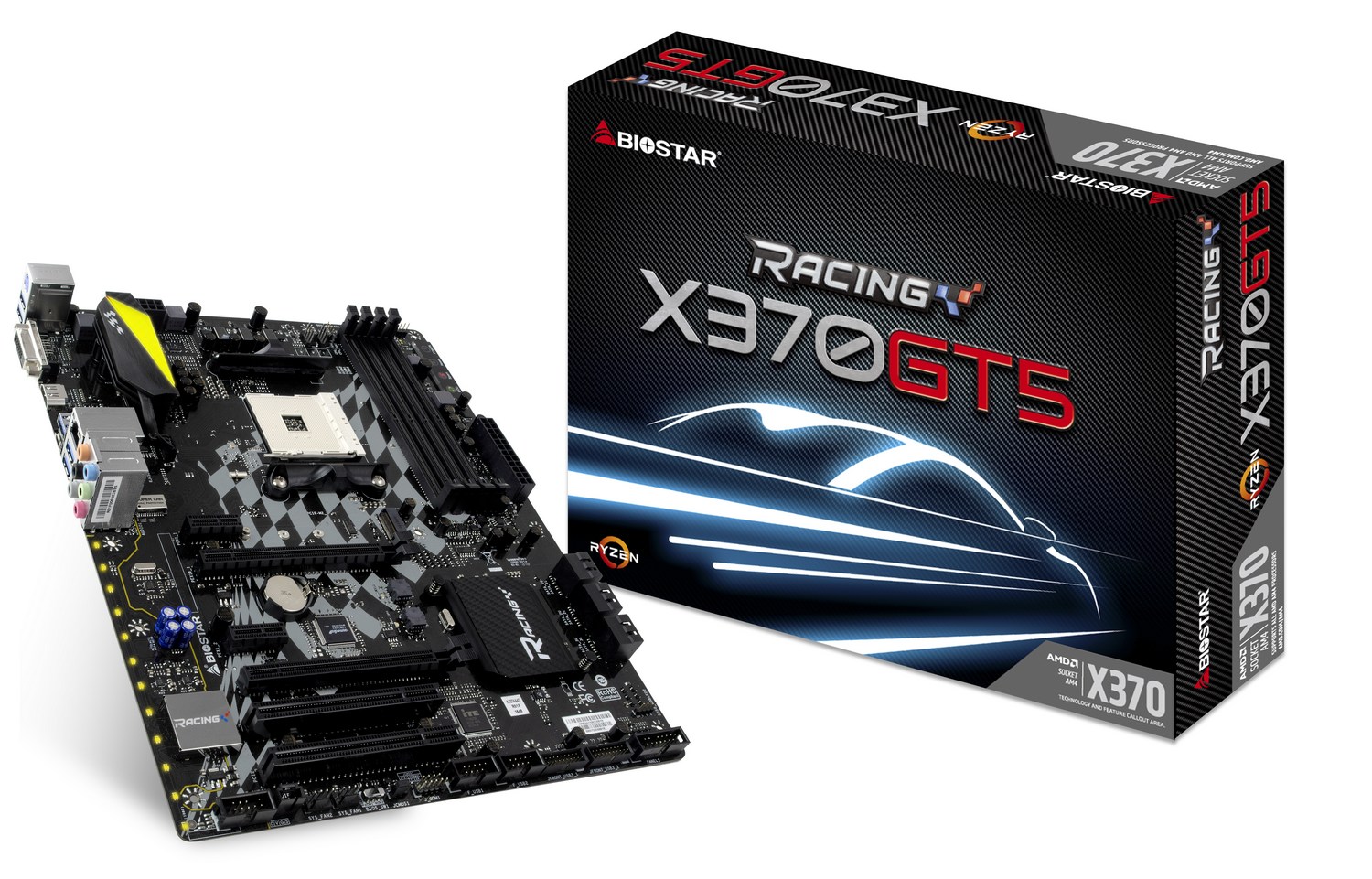 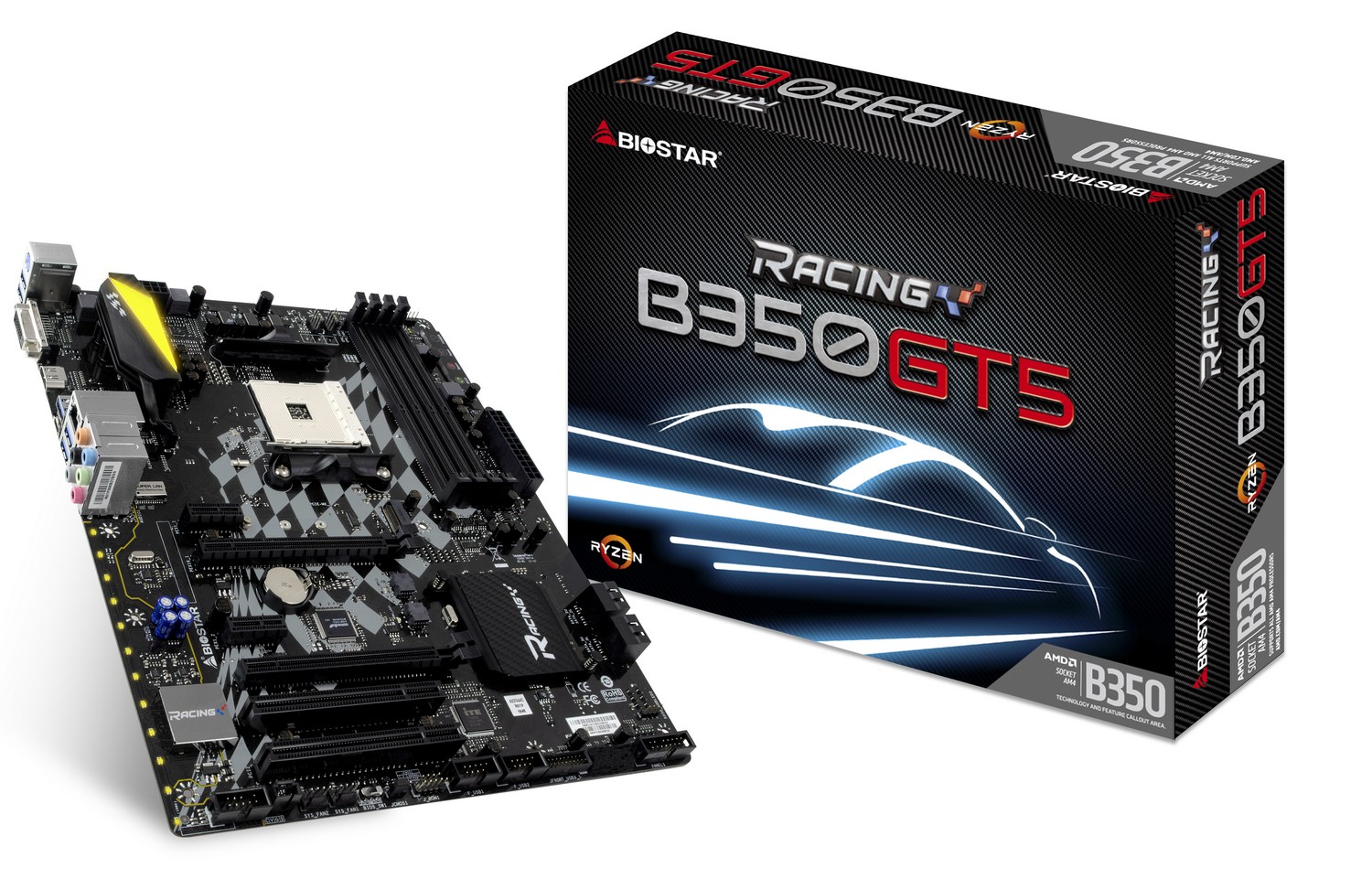 Joining the family of RACING Series boards is the RACING X370GT5 / RACING B350GT5 featuring the stylish VIVID LED Armor as well as the 5050 LED Fun Zone allowing gamers and enthusiasts to fully customize and tailor their rigs for their personal style. 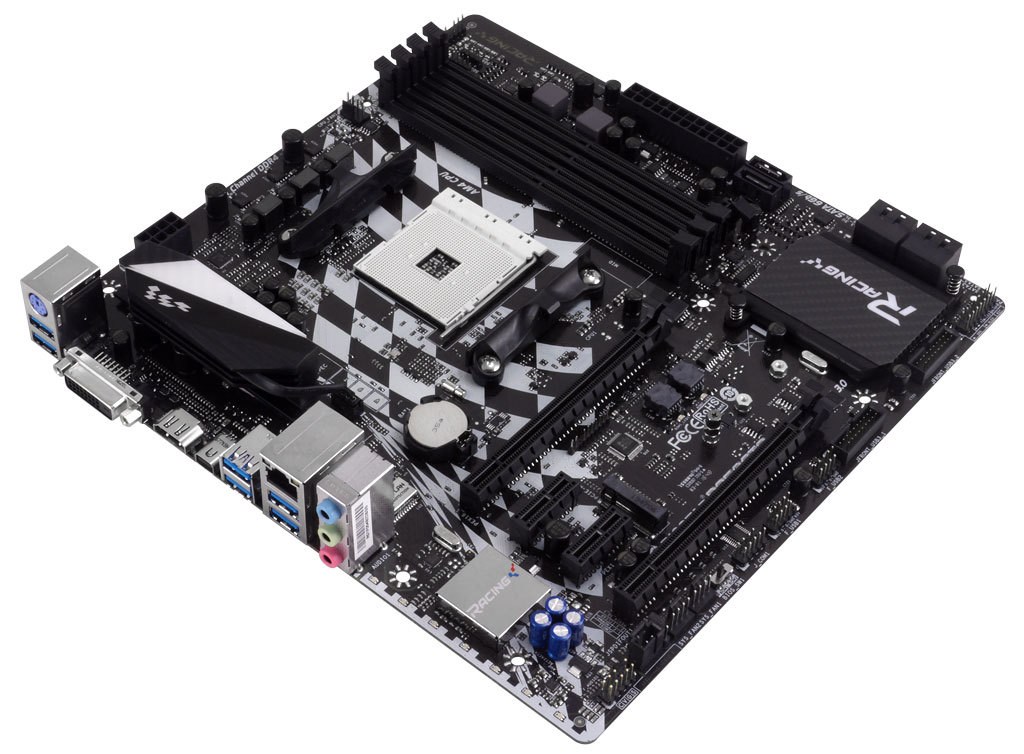 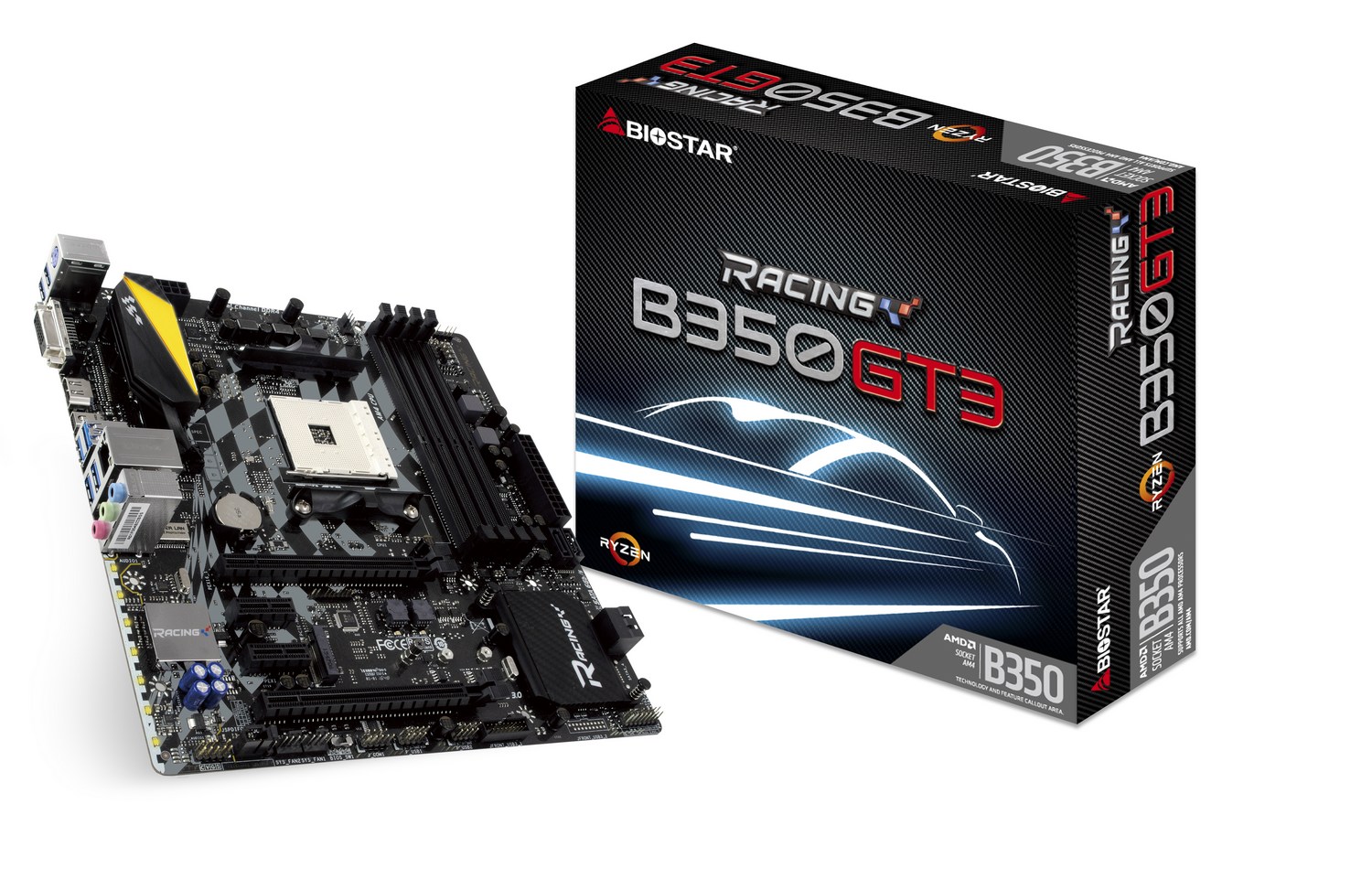 The full-wave of features from the 2nd-gen BIOSTAR motherboards echo throughout the series with M.2 Cooling Protection for optimal operating conditions for M.2 storage, Lightning Charger for fast charging of your mobile devices so you can get more of your PC instead of tying up the wall outlet. Another feature designed for overclockers is Digital Power+ for stable power delivery and endurance. For added style, all the new motherboards feature VIVID LED DJ support and 5050 LED Fun Zone with dual header for full customization freedom.

M.2 Cooling Protection
BIOSTAR RACING 2nd-generation motherboards will be the first to have an M.2 heatsink that features ultra-high cooling efficiency to protect M.2 devices connected to the onboard M.2 slot and chipset from thermal issues thus expanding M.2 device lifespan for long-term usage and overall stable operation even under high system load.

Lightning Charger
The new 2nd-generation BIOSTAR RACING motherboards will be the first to have the new Lightning Charger which helps the battery of enabled devices, including smartphones or tablets, to achieve up to 75% charge in just 30 minutes. It supports QC2.0 (12V/1.5A output), Apple Mode (5V /2.4A) and BC1.2.

FLY.NET
AMD AM4 RACING motherboards come with the new networking solution for gaming: the DRAGON LAN together with FLY.NET bandwidth management software which automatically detects the best settings for your bandwidth, maximizing priority to those that need it the most meaning games will receive a smoother experience with improved lower latencies and an ultra-stable network connection when running multitple software that utilize the network.

Lighting up Your Life with RACING Style

VIVID LED Armor
The new VIVID LED Armor enhances the Armor protection for the I/O interfaces and electronic audio components without static electricity. It comes integrated with onboard LED lighting for DIY fun. This feature also enhance performance as it keeps the system stable and protected from dust build-up and static interference.

5050 LED Fun Zone
The brand-new 5050 LED Fun Zone comes with two 5050 LED headers to bring more colorful lighting options to DIY lovers. This improves upon the original feature allowing for a much more flexible way of adding lights to your system.

The BIOSTAR RACING X370GT7 motherboard will be offered with a special bundle and will come with a BIOSTAR M200 M.2 240GB solid-state drive.