The Light Saber on Motherboard - Powerful Weaponry in PC Star-War

Apacer is pleased to announce its groundbreaking achievement in DDR history, BLADE FIRE DDR4 with heartbeat LED, perfectly for gaming, overclocking, and M.O.D enthusiasts. It is astonishing to see speed at 3200MHz with LED pulsing at 77 beats per minute yet it is still consuming low voltage at 1.35V. It is compatible with Intel® & AMD platforms, providing unprecedented performance and energy-saving efficiency. Backed by the world’s best technology in industrial memory module and storage, BLADE FIRE DDR4 makes users on fire in the gaming/ overclocking star-war.

Respectable capacity of 32GB, frequency up to 3200MHz
High stability & compatibility
The world-class BLADE FIRE DDR4 is an advanced generation of BLADE DDR4 which was published in Feb 2015, featured a sensational armory design on heat spreader as well as LED lights heartbeat effect. The meticulously screened ICs allow the optimized stability and compatibility while playing in the heavy workload games. BLADE FIRE DDR4 is available in 4GB, 8GB and 16GB capacities in dual-module package and comes equipped with total capacity of 32GB(16GB*2). The fastest memory kit available is clocked at 3200MHz, and BLADE FIRE DDR4 kits are ranged in four different clock speeds from 2800MHz 1.2V to 3200MHz 1.35V with 16-18-18-38. The XMP 2.0 support for simple overclocking setup delivers instant top-level performance for motherboards with Intel’s 100 & 200 Series. Not only low latency for outstanding DDR4 performance but also lower power consumption with less heat and higher reliability provides users the fastest speeds and the highest stability when it comes to gaming and overclocking. 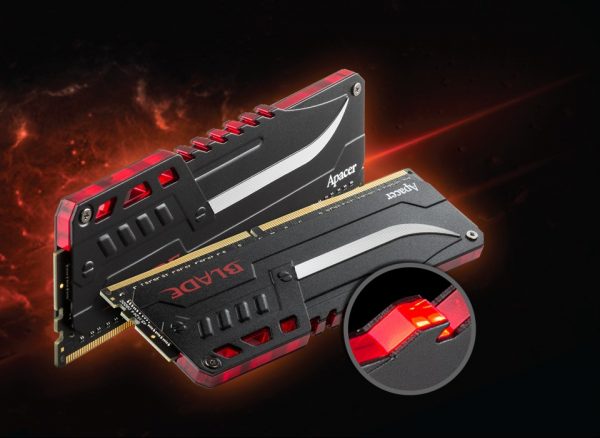 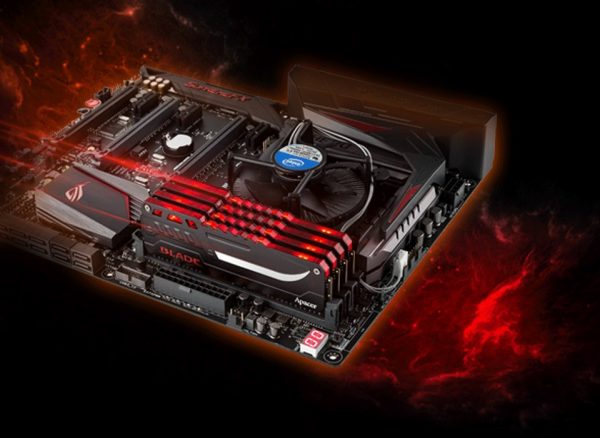 LED heartbeat, Light saber on fire
Aggressive Look with stylish, asymmetrical armory design
The heartbeat LED on top edge of the module undoubtedly brings out the spirit of BLADE FIRE, to win and shine powerfully on battlefield as every beat embodies the enhancing HP(health point). The four modules altogether on motherboard show various LED light patterns, just like a battling saber on fire in the battleground. The design truly adds some serious bling which offers the users gimmicks to show off while meeting their needs with respect to exceptional functionality.

When speaking of the design of BLADE FIRE, the black heat spreader is made from quality aluminum material with matte finish. The metallic silver saber in the middle shows an aggressive look of a gaming memory module. On top edge the serration part of a saber as well as shank at the rear displays an asymmetrical design which presenting an extreme aesthetics.

With distinguished speed and stability as well as a stylish design of LED light saber on motherboard, BLADE FIRE DDR4 allows users to experience the most enjoyable and exciting game play ever. If you’re looking for the fastest and coolest memory module available, BLADE FIRE is the one and only you have to look at. Feel the supremacy and prominence of Apacer BLADE FIRE DDR4!