The Fastest Without Limits
After the launch of the 8th Gen Intel® Core™ processors and Z370 chipset motherboards, G.SKILL has been constantly pushing DDR4 speeds faster than ever before to higher levels with various capacity configurations. With the availability of the ASUS OptiMem technology, which complements the T-Toplogy layout that uses equalized trace lengths, four-DIMM memory configuration has improved stability and memory overclocking performance. G.SKILL Trident Z memory once again achieves the world’s fastest 32GB memory kit at the ultra-high DDR4-4400MHz speed, with an exceptionally aggressive timing of CL19-19-19-39 in 32GB (4x8GB) at 1.5V. Below is the screenshot of the memory kit being stress tested and demonstrating its stability on the ASUS ROG MAXIMUS X HERO (WI-FI AC) motherboard with the Intel® Core™ i7-8700K processor. 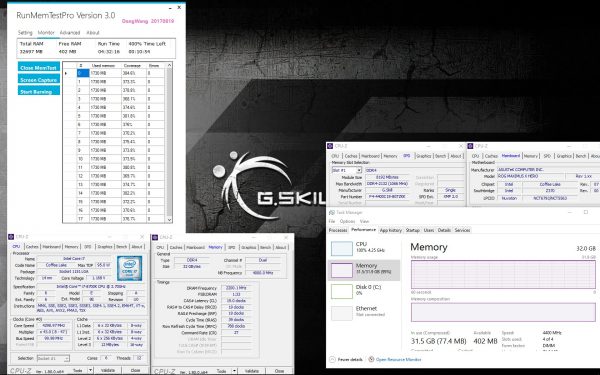 Built For Extreme Overclockers
Whether it’s for a seasoned overclocking veteran or an enthusiast who is on the path of hardware overclocking for benchmark world records, this new Trident Z series DDR4-4400MHz 32GB kit is programmed with the Intel XMP 2.0 profile to help easily enable the memory settings in BIOS. Of course, that wouldn’t stop anyone from manually tweaking the settings further to eke out every last ounce of performance from a DDR4 system.