Powering versatile designs from both HP and Lenovo and designed to fit virtually every office environment, the AMD Ryzen 9 PRO 3900, AMD Ryzen 7 PRO 3700, and AMD Ryzen 5 PRO 3600 CPUs are based on the world’s most advanced 7nm “Zen 2” core architecture. Offering up to 12 cores and 24 threads – the most of any business processor[i] only with the AMD Ryzen 9 PRO 3900 processor – they provide a high-performance and high-efficiency design built for even the most rigorous business environments and are power efficient without sacrificing performance.

In the coming months, enterprise customers will be able to purchase Ryzen PRO processor-based systems from top PC vendors including HP and Lenovo.

Lenovo ThinkCentre desktops have been available with AMD processors – offering great performance, security and energy-saving features – for more than ten years. That heritage continues with the ThinkCentre M75s-1 small form factor (SFF) and M75q-1 Tiny form factor offering the latest Ryzen PRO processors, up to 12-cores on the SFF model.

The clean and sleek look and feel is backed up with strong security and manageability features. New for 2019 AMD platforms is the Smart Power-On feature allowing users to mount the desktops in more flexible locations, such as a wall, under a desk or behind a monitor. Simply press ALT+P on the keyboard to power on the system. The M75q-1 Tiny also now includes a USB Type-C port and an HDMI port as standard and the option of two additional user-defined ports. 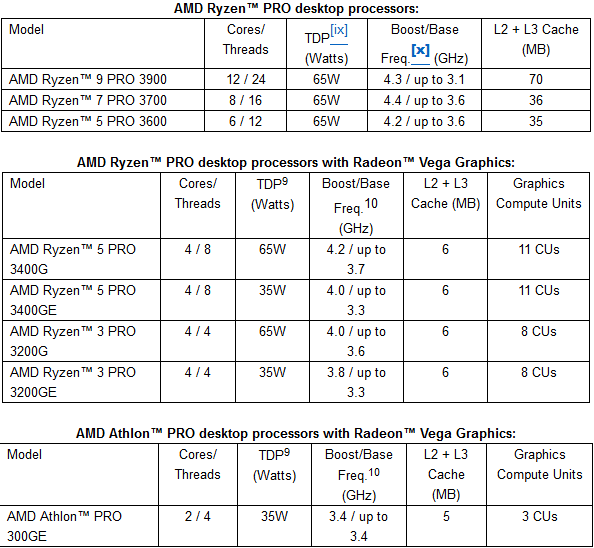 [i] Based on AMD analysis, August 2019. Business desktop processor is defined as a processor designed for desktop PCs which includes full, integrated manageability and security features. [RP3-1]

[vi] Based on business class desktops with AMD Pro processors, Windows Pro, up to 11 USB ports, TPM with two M.2 slots for storage as of September 2019.

[vii] Based on business class USFF desktops having less than 2 liters in volume, with 9th Gen Intel processors or AMD Pro processors, integrated VESA mount and VGA, 6 USB Ports, Windows 10 Pro, and TPM. Smallest based on volume, most powerful based on processor, graphics, memory as of September 2019. These statements have not been independently verified by AMD.

[ix] Though both are often measured in watts, it is important to distinguish between thermal and electrical watts. Thermal wattage for processors is conveyed via thermal design power (TDP). TDP is a calculated value that conveys an appropriate thermal solution to achieve the intended operation of a processor. Electrical watts are not a variable in the TDP calculation. By design, electrical watts can vary from workload to workload and may exceed thermal watts. GD-109

[x] Max boost for AMD Ryzen PRO Processors is the maximum frequency achievable by a single core on the processor running a bursty single-threaded workload. Max boost will vary based on several factors, including, but not limited to: thermal paste; system cooling; motherboard design and BIOS; the latest AMD chipset driver; and the latest OS updates.