UMIDIGI’s new rugged camera phone BISON Pro is confirmed to be equipped with Helio G80 gaming processor with up to 8GB + 128GB storage.

Compared to BISON, BISON Pro has made a leap in performance. It features an Helio G80 gaming processor and supports two storage options of up to 8GB + 128GB, ensuring a smooth and lag-free experience whether it is for daily usage or gaming. Another key feature is the infrared thermometer. In this special period, real-time monitoring of body temperature can better help you know your physical condition. And from the leaked renders, we can find that BISON Pro will have two new colors to choose from, one is gray and the other is black. 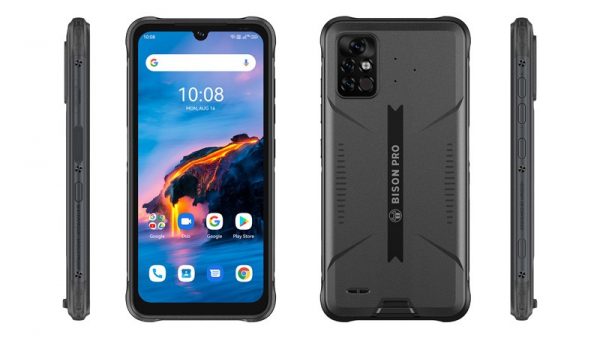 BISON Pro has some similar specs to BISON. It comes with Sony 48MP triple camera and 24MP selfie camera, bringing users a high-quality shooting experience that is even better than some camera phones. It also sports a 6.3’’ FHD+ full screen to ensure all users’ creativities are well presented. To perform better in gaming, BISON Pro is equipped with a liquid cooling system that enables higher heat dissipation performance. Moreover, BISON Pro features a 5000mAh massive battery with 18W fast charging, which promises long and stable usage.

Rugged for Outdoors and Sports

BISON Pro has a solid cover made of industrial rubber that supports drop resistance of up to 1.5m. And it comes with IP68 & IP69K ratings that support waterproof, dustproof, and durable enough to withstand any harsh environment. In addition, BISON Pro is equipped with important sensors like Bosch®’s altimeter and barometer sensor, providing users with various essential real-time information through a variety of built-in outdoor toolkit apps. As a rugged phone, BISON Pro is durable enough and designed for outdoor and sports enthusiasts.

UMIDIGI BISON Pro is expected to be launched in the middle of July. To warm up this new product, the company is running a global giveaway of 10 units of BISON Pro and upcoming TWS earbuds UMIDIGI AirBuds Pro. If you’re interested in these devices, you can go to their official website to learn more and join the giveaway.