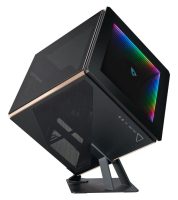 December 3rd, 2021, Taipei, Taiwan – AZZA, a leading brand of computer cases and accessories, introduces the REGIS 902. This luxury case is uniquely designed with a cube form factor, elevated above the surface by a premium aluminum stand, and has an infinity mirror addressable RGB front panel. The exterior is complemented with black tinted tempered glass panels and two brushed aluminum mesh panels with a touch of gold trim on the edges. ATX motherboard compatible, the REGIS supports up to 336mm long GPUs and dual 240/280 radiators.

The REGIS has 3-sided black tinted tempered glass panels, two sides for displaying the system, and the front for featuring an infinity mirror addressable RGB which uses an ultra-thin lighting module. The addressable RGB can be controlled via the case button, or synchronized with any motherboard software. At the bottom, two anodized and brushed aluminum panels with large mesh openings complete the frame of the Regis. Each panel is mounted on snap pins for tool-less removal. In addition, golden trims on 4 of the edges highlight the luxurious look of the cube. 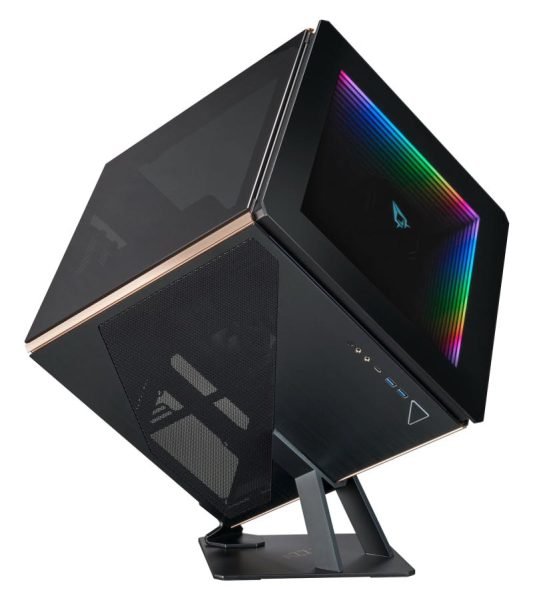 A Stand that Elevates

Meticulously designed, the CNC milled 8mm thick aluminum stand secures the REGIS in place at 45 degrees and elevates the case 175mm off the surface (at the highest point). This unique positioning allows the REGIS to be showcased from all angles. It also gives the REGIS a reduced footprint and improves airflow with two mesh panels for air intake from the bottom of the case.

Capable of supporting full mini-ITX, mATX, ATX motherboards, and ATX PSU, the REGIS has enough clearance for 210mm tall CPU coolers, 336mm long graphics card, and up to 2x 240/280 radiators which can be first mounted on removable brackets outside of the case for ease of assembly. The REGIS also holds up to 2x 2.5” SSDs or 1x 2.5” SSD and 1x 3.5” HDD which can be placed in trays and mounted in multiple positions. The REGIS includes a 140mm PWM fan pre-installed at the rear and a PWM/ARGB hub which connects up to 7 ARGB devices and powers 6 PWM fans. 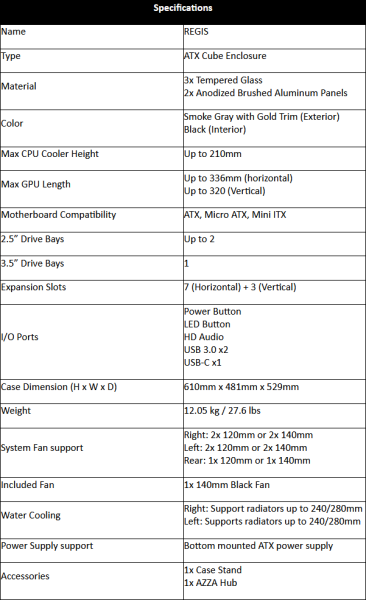