Power PC users know too well that the highest performance systems will soon be equipped with Intel? latest line of 925X series chipsets which are expected to provide the boost to push past previous milestones in PC performance. Albatron Technology took to task recently and announced its upcoming PX925XE Pro Series performance mainboards on the heels of Intel new 925XE Northbridge announcement. 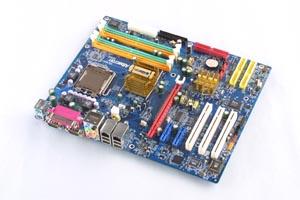 The PX925XE Pro series will contain the 925XE Northbridge and either the ICH6 or ICH6R Southbridge. This will allow a mainboard ’s FSB to reach 1066 MHz. Because this level of performance is attained without overclocking, stability at these speeds will not be considered a problem, which is good news for applications which require high performance but demand maximum stability.

This new series will include the standard PX925XE Pro version and the PX925XE Pro-R version. The Pro-R version will contain the ICH6R Southbridge chipset instead of the ICH6 chipset used by the standard version. The difference is that the ICH6R chipset will support Intel Matrix Storage technology, which is a sophisticated disk management system that can employ Series ATA hard disks and deliver high performance and fault-tolerance. Most RAID type disk storage systems require 4 separate hard disks to accommodate both performance and fault-tolerant functionality. With the Intel Matrix Storage technology, you only need 2 disks. You can economize by installing both performance sectors and fault-tolerant sectors on the same 2 hard disks.
Albatron will take extra steps to distance its self from competitors by ensuring a reliable, stable system, using high quality components such as top-end CPU power accessories and static capacitors. These boards will also provide extra assurance by meeting all requirements addressed in Intel Prescott FMB 2.0 power specifications.

These boards will also provide a unique feature called the ?fterburner?which can auto-overclock your system according to the application that is currently in use. Depending on the application, it can increase performance from 15-20 percent. The ?fterburner?requires no configuration other than enabling ?fterburner?in the BIOS setup utility.

Another planned feature is the automatic CPU fan adjustment function which sets your CPU fan speed up or down depending on the CPU operating temperatures. This not only will ensure the most appropriate amount of cooling but will also minimize on fan noise. These boards will include a built-in Realtek Audio chipset which provides 8 channel, High Definition Audio with unmatched stereo capabilities. These boards will also provide two LAN ports, a Broadcom 1 Gbps LAN and a VIA 10/100 Mbps LAN.
The PX925XE Pro series mainboards are out to go faster and do more than any system to date. With Intel new chipsets, unique auto-adjustment features and meticulous attention to stability and reliability, these boards are on target to set the new standards for the next wave of performance mainboards. 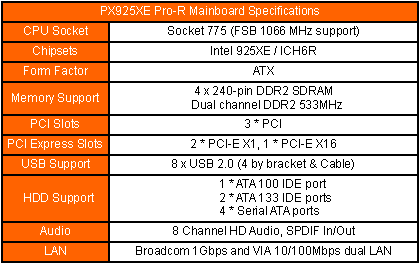