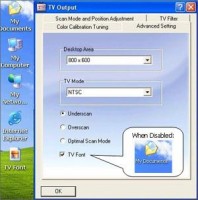 XGI has always been considered as an innovative mind for enhancing entertainment experiences on the PC, and is keeping its word on it. The new R1.09.68 driver is packed with 2 special features, TV Font Control and Theatre Mode.

When user choose to output PC contents onto the TV, the font are mostly jagged and difficult to see, that’s why XGI have introduced the automatic TV-Font feature, to thicken the fonts thus reduce the jaggy effects. However, with the vast improvement of TV-scanning techniques in the modern day TV-sets, those jagged lines are no longer an issue; some might even say the “bolded” fonts are quite messy and difficult to look at. To accommodate the needs for every Volari user and TV-set, XGI have decided to make it a User’s Decision. In the Reactor Driver, Volari users can choose to Enable or Disable TV font, to users’ preferred liking. 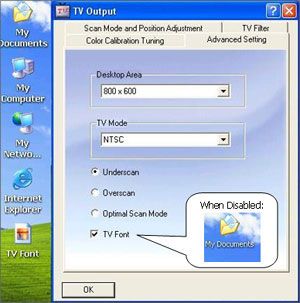 Another new feature is called “Theater Mode”. Before, when users are using Dual Output through mirror mode to display video onto two output devices, the second display device will not be able to show video contents due to what’s called an “overlay issue”. But now, a new feature in the Reactor Driver Utility can solve this issue through the “TheaterMode” feature, where video can now be presented on both displays.

Through TheaterMode, now users can watch full screen DVDs on one monitor and work on the other, both with the best display support.