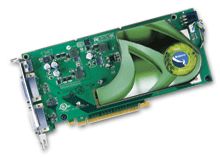 Anzeige
Albatron Technology recently announced the „Mother“ of all Graphics Cards, the 7950GX2. This monster card features two physical VGA cards conjoined by circuitry but only having a single PCI-Express connector. This new dual VGA innovation is certainly not for the weak-hearted. It is a super high end graphics cruncher capable of taking on and humbling any graphics game in its path and perhaps for a long time to come.

The two conjoined cards on a 7950GX2 each contain an NVIDIA® 7900 GT GPU with a 500 MHz engine clock. The total memory package is huge, containing a total of 1 GB (512 MB on each card) of 512-bit DDR III memory. The rear card will contain an SLITM connector that can be used with another 7950GX2 giving you a Quad VGA setup (note that Quad VGA setup is only supported with NVIDIA certified configurations).

If you want a chance to own the highest performing graphics card in the world today, you need to check out the Albatron 7950GX2. With the 7950GX2, you are placing yourself right on the edge of technology that is going to blast through generations of gaming software.