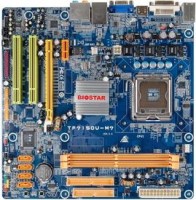 BIOSTAR TF7150U-M7 is created to support CPUs with 1333MHz FSB, giving you the flexibility to build PCs with today and future’s CPUs. TF7150U-M7 is based on NVIDIA® GeForce7150 GPU, which supports DirectX® 9.0 and Shader Model® 3.0 and offers shared memory size up to 512MB. TF7150U-M7 is one of the greatest multimedia motherboards to have three video ports onboard, HDMI, DVI and D-Sub.

Integrated HDMI and DVI with HDCP
On-board HDMI and DVI connectors are designed to meet the output protection management (HDCP) and security specification of Blu-ray and HD DVD Formats, allowing the playback of encrypted movie content on PCs when connected to HDCP-capable display

NVIDIA RAID and MediaShield™ Technology
Provide a simple point and click wizard-based interface for creating and managing multi-disk storage configuration. Allows multi-disk designs to be set up for maximum performance (RAID 0), for data protection (RAID 1), or for combination of both performance and protection (RAID 0+1 and RAID 5). Also allows RAID volumes to be converted from one configuration to another with single operation. Uniquely allows users to assign an extra disk to any RAID volume so that should a disk failure occur, TF7150U-M7 will automatically remove the failed disk and replace it with the spare.

OpenGL® 1.5 Optimizations and support
Top-notch compatibility and performance for all OpenGL applications 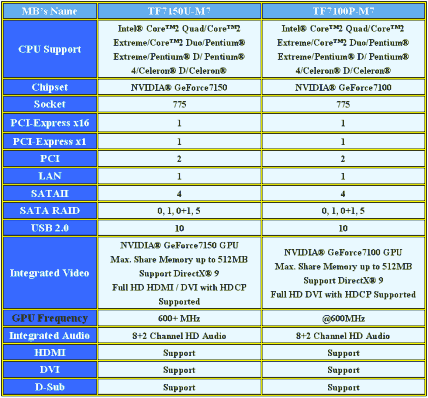