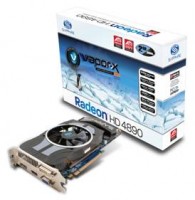 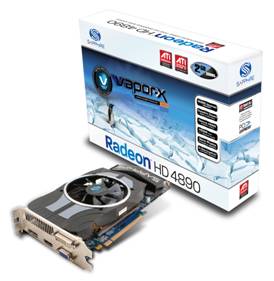 Like the 1GB model announced at Computex last month, the SAPPHIRE HD 4890 Vapor-X 2GB model is a SAPPHIRE original design. It has SAPPHIRE’s Vapor-X cooling module on the GPU together with a heatsink and profiled fan venting heat out of the case. With core clock speed of 870MHz and 2GB of DDR5 memory clocked at 1050MHz, this model not only has additional memory but is also quieter and significantly faster than competing products based on the standard reference design. The larger memory size and faster speeds deliver higher performance in rendering tasks and increased frame rates in games – especially at high resolutions and where complex textures are used.

SAPPHIRE’s HD 4890 Vapor-X models feature four output connectors all on the bracket – Dual-Link DVI, VGA, HDMI and Display Port. Any two of the four output options can be used simultaneously, giving maximum flexibility for connection to different display types. An HDMI to DVI adaptor is also included for those who wish to use a pair of DVI monitors.

The Vapor-X series features high specification solid capacitors and SAPPHIRE ‘Black Diamond’ heatsink chokes for higher efficiency and more reliable operation. The high-polymer aluminium capacitors used have characteristics superior to regular aluminium capacitors for longer product life. The choke is an important component of the power regulation on a graphics card, and the SAPPHIRE Black Diamond (patent pending) choke with integral heatsink runs 10% cooler and with 25% more power efficiency than a normal choke.

This series uses the PCI-Express Gen2 interface, and features dual connectors for CrossFireX cables, allowing two or more cards to be used together on a CrossFireX compatible mainboard for even higher graphics performance.