Get an incredible HD gaming experience with mind-blowing performance 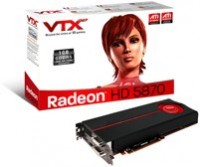 Taipei, Taiwan, September 23rd – VERTEX3D, a new expected brand of AMD graphics card, today launches the next generation video card: HD5800 series. The latest series includes HD5870 and HD5850, clocks at 850MHz and 750MHz (respectively) core and 1200MHz and 1000MHz (respectively) memory. As the most powerful GPU in the world, HD5800 series has more than 2 TeraFLOPs of compute power, delivering the extreme performance like never before. 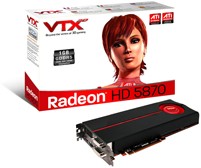 VTX3D HD5800 series is the first GPU which supports for Microsoft DirectX® 11, and enables a complete Windows 7® experience. Not only that, the latest series supports ATI exclusive Eyefinity technology, and allows gamers to extend their visual sensation up to three-screen displays. With multi-output onboard design—dual DL-DVI / HDMI / Display Port, gamers can take an advantage with this latest multi-display capabilities and enjoy the most real-life gaming experience of immersing themselves IN the game.

“It’s really exciting that VTX3D includes another fantastic addition in the product lineup,” said Willie Huang, Sales Director of VTX3D, “With the most advanced technology, VTX3D HD5800 series is ready to tackle all the demanding 3D games and deliver the ultimate gaming performance like never before!”