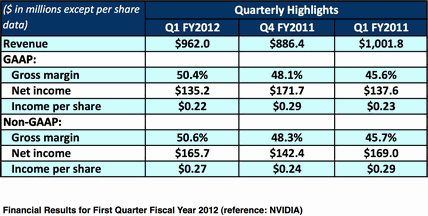 „Our core GPU businesses are solid, with expanding revenues and margins. And this quarter, our Tegra mobile business took off,² said Jen-Hsun Huang, NVIDIA president and chief executive officer. „With the Tegra super chip and the Icera wireless communication processor, we will offer our customers the two most important processors of the mobile computing revolution. We look forward to completing the Icera acquisition shortly.²

Outlook
Excluding the Icera acquisition, the outlook for the second quarter of fiscal 2012 is as follows: