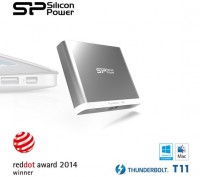 Taipei, Taiwan – March 24th, 2014 – SP/ Silicon Power, the world’s leading provider of memory storage solutions, is honored to announce that SP has won the prestigious recognition from Red Dot Award: Product Design 2014 with its Thunder T11 – the lightest and smallest Thunderbolt™ external SSD on the market. Silicon Power is once again honored by Red Dot Award: Product Design since the F80 USB Flash Drive and A15 Portable Hard Drive earned the recognition in 2013. It is undoubted that Silicon Power has established its substantial role in memory storage solutions industry. 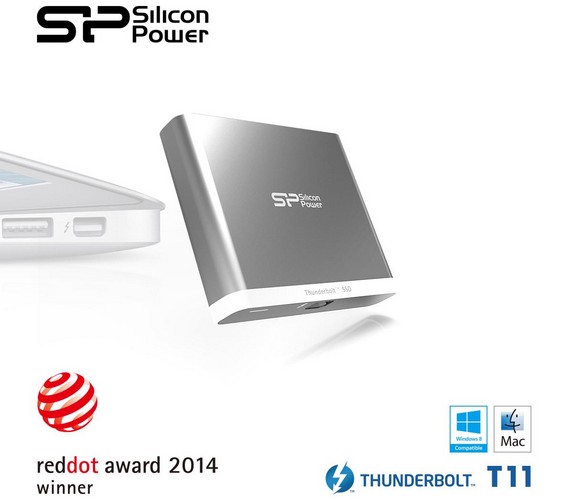 The Red Dot Design Award, founded in Germany in 1954, is one of the three most prestigious international design recognitions. Regarded as the “Design Olympic”, the Red Dot Design Award is held by the most reputable design association in Germany – Design Zentrum Nordrhein Westfalen with the jury joined by renowned experts from all over the world, which guarantee the high quality level of the competition. In 2014, Silicon Power’s Thunder T11 outshone other competitors again by its fashionable appearance and astonishing function among 4815 entries from 53 countries. With this honor, Silicon Power was approved its distinctive ability in product designs and will keep on developing more and more remarkable and attractive products.

Thunder T11 Thunderbolt™ external SSD
Thunder T11 is the lightest and the smallest Thunderbolt™ external SSD on the market, which is half the size of ordinary storage devices and only weights 65g. Furthermore, Thunder T11 is three times speed of USB3.0 HDD, which delivers astonished transfer rate up to read/write 380MB/340MB and offers the ideal drive for users on the go. Thunder T11’s Aluminum enclosure not only brings simple and stylish appearance but also can protect your files with cooling effect which provides you a noise-free storage experience.