The coming new flagship phone from UMIDIGI, UMIDIGI Z1, is set for a launch on 19th June, together revealing the Z1 Pro. The UMIDIGI Z1 Pro will come with a decent 5.5-inch AMOLED display screen with a resolution of 1920 x 1080 pixels.

UMIDIGI Z1 Pro is nailing the design with renovation in technology. We can tell from the photos that the back of UMIDIGI Z1 Pro is an integrated unibody with antenna lines seamlessly injected in as a whole piece. An unity of smoothness and completeness feeling is what it can offer. The 6.95mm super thin body is made possible through structural and technical innovations, according to UMIDIGI, it is due to 4 major parts of recreation. First is the AMOLED screen, which enables the screen to be much thinner. Then followed by the new design of the battery that also comes with thinner size. Besides technical innovation, UMIDIGI also managed to reduce thickness significantly through the novel and refine flute design inside the body and the near-jointless assembling of the precision components. With the thinness and silky lines, UMIDIGI Z1 Pro would be a comfortable and light grip in hand. 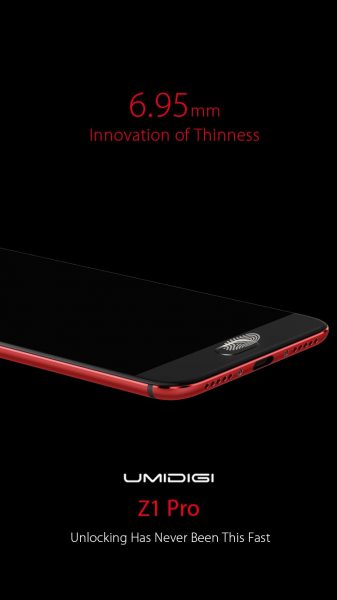 Under the hood, this phone is expected to ship with a decent package that 6GB of RAM, Android 7.0 Nougat out of the box, and an anticipating big battery. Above all these specs, The 6.95mm super thin body is making UMIDIGI Z1 Pro presumably the thinnest for big battery phone.

Full details of UMIDIGI Z1 and Z1 Pro will soon be revealed on 19th June, now you can get a closer look of UMIDIGI Z1 Pro on their official website, along with $9.99 subscription and giveaway available here: umidigi.com