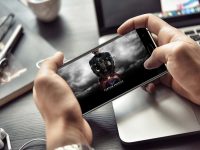 OUKITEL just announced the presale of their latest smartphone OUKITEL K3 which they define it as a smart phone designed for the business man. Users will be able to get K3 quite soon to check out its charm.

Anzeige
It not only holds fashionable glossy design but also supplies powerful battery. This week OUKITEL release a video about OUKITEL K3 ‘s consumption test. Check the video below about how much power it would consume by playing a whole 1080p film.

It is known that OUKITEL K3 has 6000mAh battery and its system is specially optimized to make it last longer. OUKITEL Lab plays the film “Captain America” starting from 100% power. Of course, it is tested by most power consumption way by maximum volume and brightest screen. As screen is the item that consumes most power, if you change the brightness and volume rate, it will last longer.

In the video, the staff checked the battery percentage in some time points. After half an hour, K3 only consumes 3% power; 1 hour passed away, the battery percentage is 94%. After the film playing for 2 hours , the battery still has 87%. After the whole film which is 2 hours and 16 minutes is over, it just consumed 15% and left 85 % power. According to the tested data, by the most power consumption way, you can watch movies continuously for up to 15 hours, but the actual using time will differ according to smartphone status and network condition.

If you set different screen brightness and volume, it will support longer as screen is the most power consumption item. OUKITEL K3 also stands out in other aspects like dual 16MP cameras, double dual-lens cameras on front and back, dual glossy design, powerful octa-core chipset, large 4GB RAM and 64GB ROM,5.5 inch FHD display and so on, all these makes OUKITEL K3 a worthwhile smartphone to buy.

Presale of OUKITEL K3 is still hot ongoing, the price is only $139.99 which is lowest among its range. Check OUKITEL K3 presale on oukitel.com/store.html.