24/6/2021 – Today, TEAMGROUP unveils the T-FORCE CARDEA Z44Q PCIe4.0 SSD with two patented cooling modules, QLC Flash, and PCIe Gen4x4 interface that supports the latest NVMe1.4 standard and provides a massive capacity of up to 4TB. Consumers can opt for different specs based on their preference and needs, and gamers can have everything from cooling, performance, and capacity in one SSD, and explore the infinite possibilities with T-FORCE CARDEA Z44Q PCIe4.0 SSD.

Equipped with QLC Flash, the T-FORCE CARDEA Z44Q PCIe4.0 SSD supports the latest PCIe Gen4x4 interface and NVMe 1.4 standards, meaning that it is compatible with PCIe Gen3.0 interface while offering up to 4TB in capacity. The read/write speeds reach up to 5,000/4,000 MB/s [1], which are 10 times faster than traditional SSDs, making it a pioneer for the new TB M.2 era and the best choice for players in terms of cooling, speed, and capacity.

T-FORCE CARDEA Z44Q PCIe4.0 SSD is equipped with two patented cooling modules that gamers can freely interchange between. The patented high-strength aluminum heat sink (Taiwan Patent: M541645) can multiply cooling effects while the patented ultra-thin grapheme heat sink (Taiwan Patent: I703921; China Patent: CN 211019739 U) has an ultra-light volume for easy assembly and low interference. Both cooling modules are effective in cooling the SSD, making it a great addition to PCIe SSD for cooling and performance. 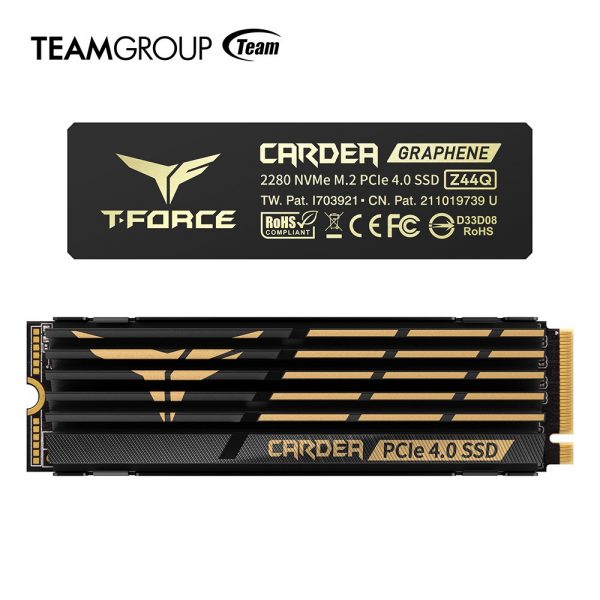 ¹ The product is compatible with Intel and AMD platforms. The read/write speed is obtained through internal laboratory testing on performance with motherboards supporting the PCIe 4.0 interface, the actual speeds may vary due to different software/hardware on various platforms.