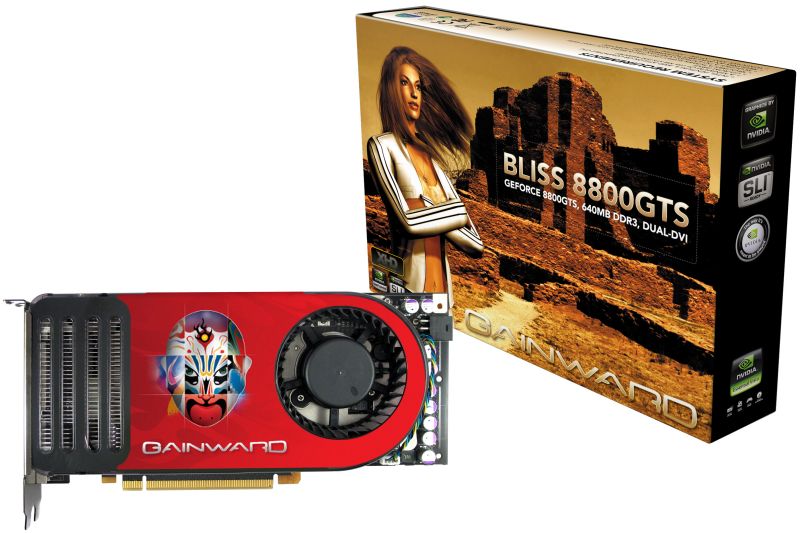 Finally it´s here, the much longedfor faster Golden Sample® version of NVIDIA´s® GeForce® 8800GTS from Gainward. This card is designed to take you to the next level of performance where speed is a major factor as well as rock-solid stability.

Gamers play to win; we can not improve their gamings skills but we can give them the right tool to win.
We know how competitive gamers are, we realize how demanding they are and we know how much effort they put into becoming nr 1 in their field. We also know how little it takes to ruin all that. How devastating it can be if only one component does not perform to 110 percent. Therefore at Gainward we take just that little extra time to double check the performance of our Golden Sample® products, ensuring a rock-solid trustable fast product for all hardcore gamers who demand nothing but perfection.

Play smart, Play with Gainward. Do not burn-out before you reach the finish line.

GeForce 8 series GPU´s include all required hardware functionality defined in Microsoft´s Direct3D 10 (DirectX 10) specification and full support for the Directx 10 unified shader instruction ser and Shader Model 4 capabilities. The GeForce® 8800GTX is not only the the first shipping DirectX 10 GPU, but it was also the reference GPU for DirectX 10 API development and certification.

Extreme High Definition Gaming (XHD).
All GeForce® 8800-based GPU´s are designed for Extreme High Definition gaming (XHD), where games can be played at high widescreen resolutions up to 2560×1600. XHD has over seven times the picture clarity of native 1080i HD televisions and double the picture clarity of 1080p HD format. XHD widescreen resolution allows users to see more of their PC games, enhance their video editing, and even add useful extra screen real estate to applications such as Google Earth. The dual-link DVI outputs on GeForce 8800GTX boards enable XHD gaming up to 2560×1600 resolution with very playable frame rates. SLI configuration allow dialing up eyecandy to new levels of details never seen in the past, all with playable frame rates.

Overall, the GeForce® 8800 GPU series is best defined by these four major categories: