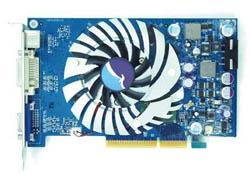 Although the newer PCI-Express admittedly has more future performance potential than AGP 8x, both technologies are actually limited by the bandwidth of today ’s chipset technology. There is only so much bandwidth that can be generated no matter which interface you choose. In fact, because of this chipset limitation, AGP’s full potential has yet to be reached, even by the fastest AGP 8x cards on the market today (e.g. nVIDIA 6800 Ultra based cards). One thing is for sure. Current AGP 8x cards can more than satisfy the demanding graphic requirements generated by today ’s powerful gaming applications.

These cards will contain a D-SUB port, a DVI port and a TV-OUT port. The accessories include an HDTV cable that supports S interfaces and AV interfaces as well as HDTV. The software bundles include WinDVD creator and the ARX FATALIS 3D game and a 5-in-1 game pack.

With the AGP6600 and AGP6600GT VGA cards, users can now upgrade their AGP 8x based systems, significantly improving their VGA capabilities and extending the life of their mainboard without having to go down the PCI-Express road.