Who said you can’t upgrade to high quality video graphics without a PCI-Express VGA card and a new PCI-Express Mainboard? You didn’t hear that from Albatron Technology, who recently announced its mid-range AGP6200 VGA card employing NVIDIA’s NV43V GPU. 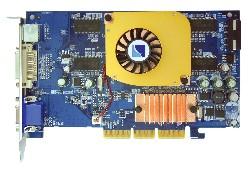 The NV43V is a GPU that uses PCI-Express technology but has been adapted to the AGP interface. NVIDIA accomplished this by designing an HIS (High Speed Interconnect) chip to translate signals between AGP and PCI-Express thus preserving the original PCI-Express core and bandwidth of the GPU. The result is a high-flying, reasonably priced, AGP alternative for those who want to extend the life of their AGP based mainboard.

The NV43V GPU is designed using a 0.11 micron process technology with 4 pipelines. This GPU comes with Pure Video™ Technology and supports Microsoft DirectX 9.0C along with Shader Model 3.0.

The AGP6200 comes with 300MHz core frequency and 128 MB of DDR memory (128-bit). D-Sub, TV-Out and DVI interfaces are all supported. Finally, Albatron made sure that the AGP6200 would operate reliably under heavy stress and load by using only Japanese capacitors.

Users who want to upgrade their graphics don’t have to put away their AGP based mainboards just yet. Albatron’s AGP6200 comes to the rescue with all the trimmings of a performance AGP card without the high-priced PCIe upgrade penalties.