September, 2006 – Computer central processing units have officially entered the multi-core era. Desktop computers are now infested with all kinds of dual-core related news for different system components. The processor rivals Intel and AMD have both announced their flagship dual-core CPUs, the Intel Pentium D950 and AMD FX-60. While the processors performances are improving exponentially, the heat released from these units are on the rise as well. In the Spring of 2006, Thermaltake Technology has officially released the new external liquid cooling system – the Tribe VX. Not only does the Tribe VX retain the excellent heat dissipation capabilities from the original Tribe, the external appearance and design has been greatly renovated to fit the contemporary simplistic style. The Tribe VX can easily blend into and complement Thermaltake’s other home theatre system products. 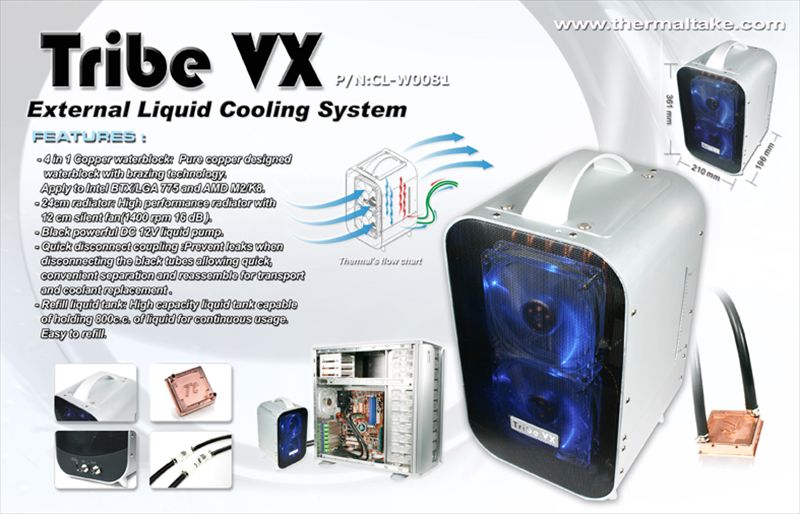 The Tribe VX has six major elements that make it a great external liquid cooling system. First, the 4-in-1 all-copper CPU waterblock is designed through our newest brazing technology. Not only is the new waterblock corrosion-resistant and withstands high-pressure, the brazing process ensures the waterblock is virtually impermeable. On top of the external enhancements, the internal water routing has been enhanced as well to bring the heat out of the waterblock in the shortest amount of time using the shortest route possible. The new mounting mechanism enables the unit to support Intel BTX, LGA775, AMD AM2, and AMD K8 processors.

Secondly, the 240mm all-aluminum radiator utilizes the special properties that aluminum has to effectively dissipate the heat within the radiator as quickly as possible. Third, the twin 120mm blue LED fans spin at 1400RPM and only produce 16 dB of sound. The specially designed mesh cover of the unit enables the hot wind to be dissipated from all directions of the radiator.

The superior 12V pump is related to the Big Water 735 and 745 by blood. It pumps out 400 liters per hour and has a blue LED built in. A low-noise 16dB specification of the pump naturally camouflages the pump within its surrounding environments. Our 70,000 MTBF guarantee will ease the users and let them have a peace of mind knowing that their new Tribe VX will not fail due to a pump failure. Coming out of the pump are hoses with CPC quick connectors. These special CPC connectors let the user to connect and disconnect the hoses with ease and will never spill all over the place like traditional connectors. Lastly, the 800CC large capacity reservoir of the Tribe VX can be filled up conveniently anytime, anywhere. There should be no reason why enthusiasts would not rush out and grab a Tribe VX after realizing all of its great features.