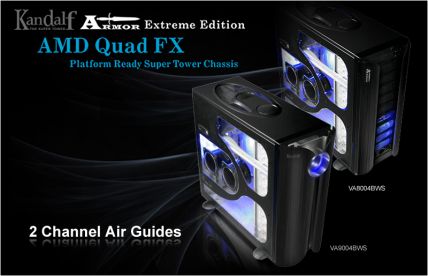 Thermaltake has worked with AMD during the development phase of this high-performance gaming chassis, which is reengineered specifically to support AMD Quad FX platform by providing both structural strength and maximum thermal efficiency. Maximum cooling capability is achieved by implementing Dual-Channel Air Guide that forces cool air from outside of the system directly to each of the two CPUs; thus, decreasing the CPU temperature tremendously and keeping the relative ambient temperature inside the chassis at the minimum at the same time. In addition, two 120mm and two 90mm ultra-quiet fans included provides unmatched airflow within the chassis to remove heat generated by processors, graphic cards and other heat sources.