Delft, Netherlands-September 6, 2007 – OCZ Technology Group (LSE: OCZ), a worldwide leader in innovative, ultra-high performance and high reliability memory, today announced the toughest and fastest additions to its award-winning lineup of flash drives. The all-new ATV and ATV Turbo are ruggedized storage solutions for professionals, students, and gamers on the go, and are built to handle whatever rough terrain you encounter. Developed to compete with the fastest flash drives in the world, the ATV Turbo features unbelievable speed for today’s busy lifestyles. 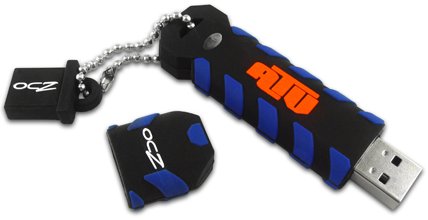 „The OCZ ATV series is designed to operate under harsh environments with its shock and water-proof design,“ states Jacky Huang, VP of Product Management at OCZ. „Besides its all-terrain nature, we also built this device with all the latest storage technology to make it truly cater to the most performance-demanding power users with its fast read/write speeds.“

The shock-proof ATV features mainstream speeds offering consumers an affordable option and was designed to safely accommodate a wealth of important data and media files. The ATV Turbo takes speed to a whole new level for performance enthusiasts and boasts the fastest speeds on the market with read rates of up to 35MB/ per second and write rates of up to 30MB/per second! Not only are these premium flash drives aggressively fast at transferring files of all types and sizes, but are optimized for Windows(r) Vista(tm) Ready Boost, offering true performance advantages to this latest operating system.