Who Says Size Does Not Matter! As Long As One Got Enough Stamina!

July 30th, 2010 – As a rule of thumb, any performance graphics cards on-board memory

Anzeige
exceeding 1GB are merely for show! For most of GPUs do not possess
enough calculating power to fully utilize so many frame buffers. There is a
revolutionary breakthrough triggered by Gainward innovations, just a
couple of weeks ago, Gainward released GTX 460 Miura Bulls series,
showcased its strong competences in GOOD developments, particularly
with GLH model, it won the title of world fastest GTX 460. Now Gainward
is playing the hat trick all over again, the Miura bull has received a “Frankensteined” 2GB implantation, and
created a true Monster!

Today Gainward proudly introduce you its world first own designed Gainward
GeForce GTX 460 2GB “Golden Sample”. Don’t be fooled by your old creed about 2GB myth! For the first
time, these beefy 2GB frame buffers are to be filled quickly owing to the most powerful and efficient GF104
architecture in graphics cards history. Even better, Gainward never does things by half, these 2GB memory
are to be overclocked! It wears the badge of “Golden Sample” represents its invincible performance of this
untamed beast. It’s not only huge, it’s fast and it’s full of stamina “not merely for show”. 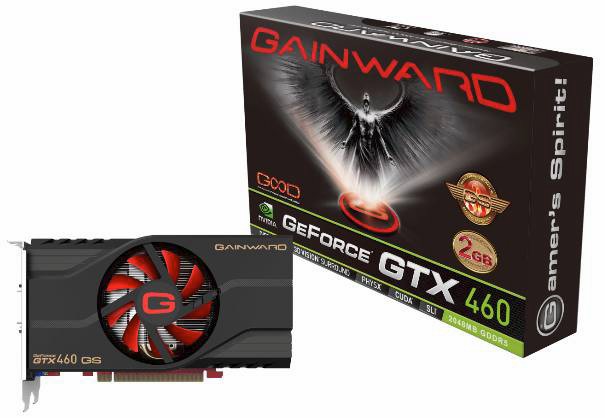 Every single piece of Gainward Golden Samples has
been applied for critical burn-in tests and this is to
ensure the best stability under aggressive
over-clocking. Gainward factory over-clocked GTX
460 2GB “Golden Sample” from 675MHz to 700MHz
for all 336 CUDA Cores and 1,800MHz for 2 GB
GDDR5 256 bit memory bank, equivalent bandwidth is
up to 115.2 GB/sec, which is more than 33% boost
from standard 192 bit GTX 460. It is absolutely rare!
Gainward is not only the first own to present this
model but ready for volume shipment. It’s no doubt
about for a good balance in performance, quietness, sustainability and most importantly depth of your
pocket.

DirectX11 performance defeats easily thanks to future-proof GF104 architecture, which fully adopts all
DirectX11 state-of-the-art technologies. Gainward GTX 460 2GB “Golden Sample” outperforms 18% than
HD5850, and 32% than HD5830 in DirectX11. While its DirectX10 performance is 12% better than HD 5830, and you get to enjoy extra NVIDIA exciting features – PhysX, CUDA & 3D Vision or more immersive 3D
Vision Surround in SLI configuration. The lively stereoscopic 3D across 3 monitors out-of-screen
experiences are beyond your senses.

The bigger the better, who says size doesn’t matter. Are you ready to take on the big charging bull? Just
have fun with Gainward GTX 460 2GB “Golden Sample”.

Gainward Grand-Prix Heatpipes Hybrid Cooler with GR8 Fans
Gainward Grand-Prix Heat-Pipes Hybrid Cooler, was designed in 6 mm
copper-water heat-pipes on a copper base conducting heats away from GPU
at highest efficiency, then dissipating onto aluminum heatsinks, which are
forced ventilated with Great 8 cm double-ball-bearings Fan (GR8) Achieve
highest cooling performance at much lower temperatures under power saving
mode and full load with much quieter operation noises than reference GTX
460. Do not waste a GOOD design without overclocking it. Gainward Great
(GR8) fan design has deployed a safety net for every GeForce GTX 460.
Have fun tweaking it.

Expertool, Best Graphics Tuning Utility in the industry
No any super fast graphics card is complete without a powerful tuning engine!
Always tempted to go one step further and squeeze last drop of juice out of
your already over-clocked gaming rig. It’s a piece of cake, Gainward takes
care of your power-hungry desires, gears you up with the best graphics
tuning utility – Expertool, which enable clock rates and fans controls. Your babies are well protected by the
safety net, the smart utility possesses fail-safe clock-down override, and even a first-timer can exercise with
peace of mind. 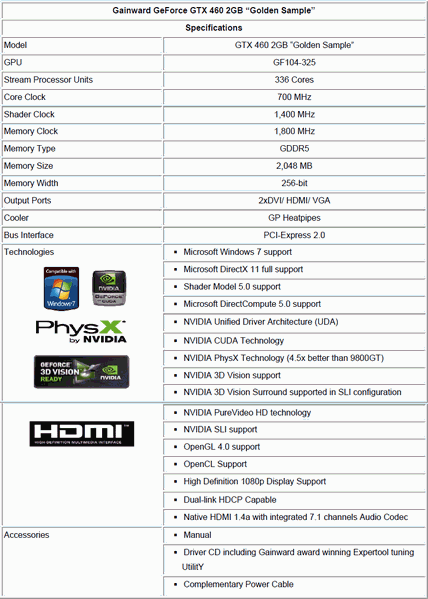