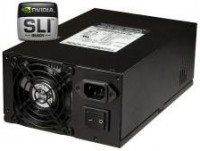 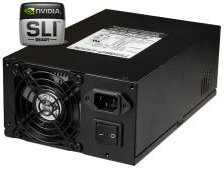 Continuing a long history of technical innovation and industry leadership, PC Power & Cooling has designed the Turbo-Cool 1200 for optimum power distribution to all components by utilizing their customary „single +12V rail“ design. This trail-blazing approach to +12V rail design ends the need to budget power „across the rails“ as is the case with the less effective multi-rail design found in the vast majority of high-performance PSUs on the market today.

„The release of the Turbo-Cool 1200 is another landmark event for PC Power & Cooling,“ stated Doug Dodson, founder of PCP&C and CTO for the OCZ Technology Group. „The Turbo-Cool series has a long history of providing an industrial, server-class computer power supply to the consumer market and the 1200 model brings the product line to new heights with a massive +12V continuous output of 90 Amps and an efficiency rating of 83%. Many of the top OEMs in the computing industry are excited to see the arrival of this innovative power supply.“

The R&D labs of major industry OEMs, medical research facilities, high-end CAD users, movie studio special effects and animation units, military labs and national security firms, and many other users with the highest professional and mission-critical requirements, already use a Turbo-Cool series PSU as their power management solution of choice. Customers for the new state-of-the-art Turbo-Cool 1200 include computer industry heavyweights such as the NVIDIA® Corporation.

As the leading graphics platform in the world, NVIDIA SLI™ Certification to the highest level is an essential characteristic of a maximum-performance power supply. The Turbo-Cool 1200 is SLI Certified by NVIDIA to run Dual GeForce® 8800 Ultra, the highest configuration currently available. NVIDIA’s power supply qualification test is the most rigorous of its kind and end-users cannot expect a power supply without official SLI certification to reliably run an SLI system. Consumers can rest assured that the Turbo-Cool 1200 will provide stable, well distributed, certified power to today’s most power hungry platforms and beyond.

Delivering 1.2 Kilowatts of continuous power with an amazing 1300 Watts peak through a complete array of connectors including six PCI-E, the Turbo-Cool 1200 offers the industry’s most robust consumer power supply design on the market. The Turbo-Cool 1200 is backed by a new 7-Year warranty commitment and the in-depth knowledge of PC Power & Cooling technical support. Each unit will ship with its own unique 14-point Certified Test Report generated at the PC Power & Cooling lab in San Diego, California. 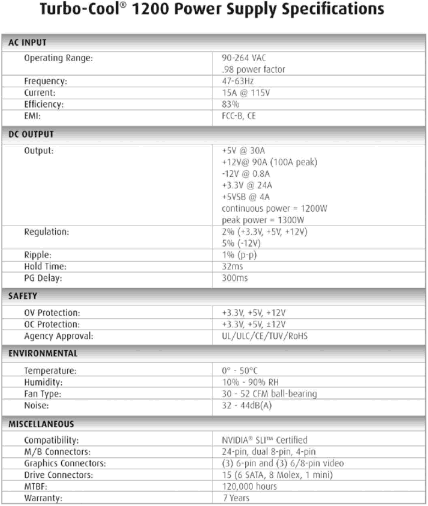