The Hottest Event in the Gaming History! WCG Grand Final – The Rise of Thermaltake Lady Power!

Oct, 2008 – From November 6-9th, be sure to catch the hottest live gaming tournament at WCG Grand Final in Cologne Germany. Four of Thermaltake’s well known gaming teams from Germany and France will be competing at Thermaltake booth, including two female teams! Surrounded are the most well know brands like AMD, Philips and Samsung, Tt XGames will not only be showing off the rise of Lady Gaming Power, but are also inviting all crazy gamers to come fight the Thermaltake Teams during tournament break time! Great prizes will be provided for winners to further heat up this biggest annual gaming event! 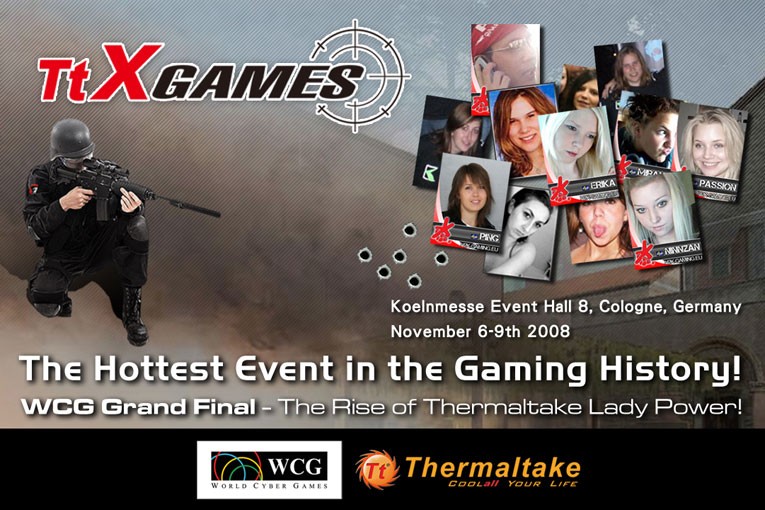 For being the leading brand in the PC DIY hardware market over the recent years, not only is Thermaltake committed to offer the most advanced technology for worldwide PC enthusiasts, Thermaltake has also shown their own passion towards E-sports activities with actual involvements and corporate sponsorships. The H2K.Thermaltake gaming team in France and Team Thermaltake in Germany have shown the world clearly how the Absolute Thermaltake Gaming Spirit works with the numerous victories received in past few years. All of these achievements have made Thermaltake the obvious hardware partner company for WCG, the biggest international e-sports organization — World Cyber Games for the past three years already. Not long ago has the news of a further three year contract between the two organization has also been released, showing Thermaltake’s leading position in the Gaming world!

This year at WCG Grand Final, other than the introduction of the latest PC cooling technology introduction for gamers, Thermaltake will be showing off their own gaming team with live tournaments! Not only will the two female teams demonstrate how lady power is rising in the e-gaming world. Extra mini games are also open to other gamers at the event to fight the Tt gamers. Not to mention the Overclocking Competition that gets most wows in all events and the wonderful prizes… Trust me, You would not want to miss Thermaltake events this year!