Best B550 Series motherboards in the market to run the RYZEN 3000XT processors.

AMD seems to have found their golden ratio as lately they can do no wrong, delivering some of the best processors the tech industry has seen so far with exceptional consistency and affordability for end users. Carrying forward with their most successful desktop CPU lineup to date, the 3rd Generation Ryzen desktop processors, their all new Ryzen 3000XT series refresh is the talk of the town with 3 new processors announced, the Ryzen 9 3900XT, Ryzen 7 3800XT, and Ryzen 5 3600XT. Built on the Zen2 microarchitecture with the base of their most successful AM4 socket and boasting a TSMC 7nm FinFET process, the new 3000XT series processors are packed for war, delivering exceptional performance bumps from their already successful previous models.

BIOSTAR has been actively testing their products with the new AMD processors to make sure they deliver the best performing motherboards in the market for these new amazing processors.

In 3D mark 11, the B550GTA scored a stable 13385 when running the Ryzen 9 3900XT while its younger siblings the Ryzen 7 3800XT scored a whopping 13454 which is higher than Ryzen 9’s score and the Ryzen 5 as expected scored the lowest of the 3 but still scoring an amazing 13034 which is compelling when compared with best bang for buck processors of its range in the market. 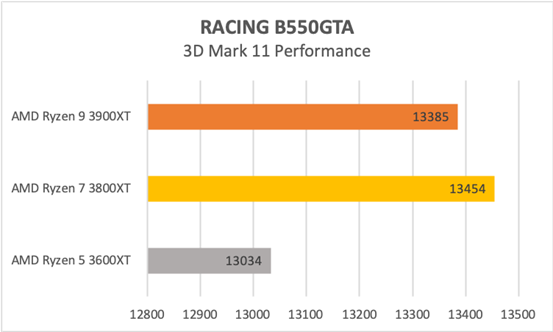 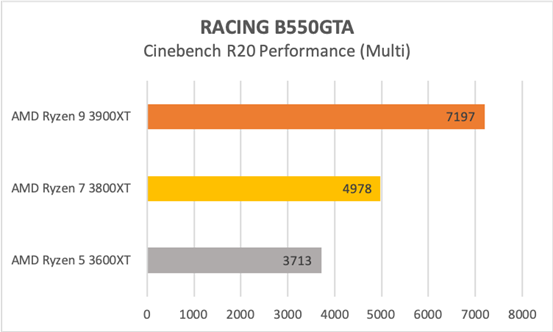 The RACING B550GTA motherboard held strong supporting the Ryzen 3000XT series processors to extract the best performance out of them as showcased by the test results which carries forward with Cinebench R20 single tread test where the Ryzen 9 3900XT scored a value of 540 closely followed by the Ryzen 7 scoring 536 meanwhile the Ryzen 5 3600XT scored 504. These scores are noticeably higher than the previous Ryzen 3000X Series processors on single threaded applications so users will be able to experience a slight bump in performance while gaming or running single thread reliant applications. 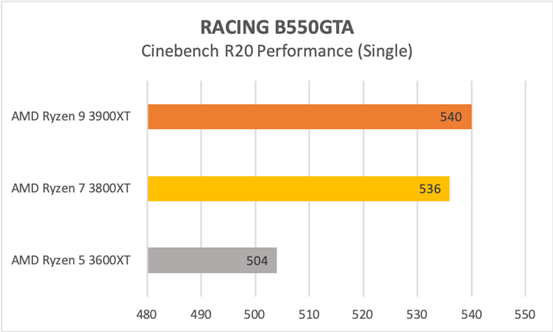 Lastly on CPU Mark performance tests, the Ryzen 9 running on the BIOSTAR B550 GTA motherboard scored an amazing 33315 meanwhile the Ryzen 7 and the Ryzen 5 Processors scored 23852 and 19086 respectively. 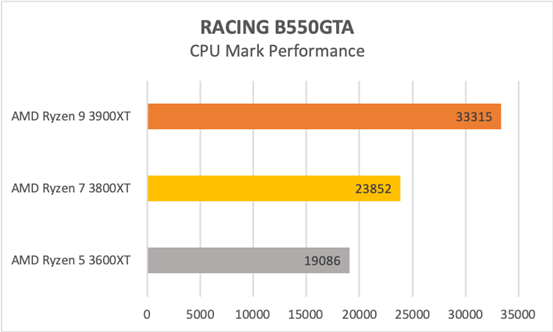