November 30, 2005 – Albatron recently announced two VGA cards, each with an unprecedented 512 MBs of on-board memory and both offering prices similar to equivalent 256 MB cards. The 6600 512 and 6600LE 512 are memory-loaded mainstream cards targeting a larger market of consumers hungry for powerful 3D graphics capability with a strong cost/performance value. 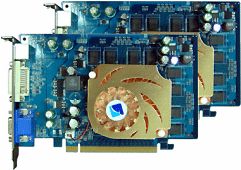 These cards use NVIDIA®’s popular GeForce 6600 series of GPUs which provide complete support for DirectX 9.0 and Shader Model 3.0 optimizing compatibility with the most popular 3D gaming software.

These cards will both have D-Sub and DVI connectors. The 6600 512 will bundle an HDTV cable which also contains S-Video and AV connectors.

With the amount of 3D graphics data increasing with every new game , the 6600 512 and 6600LE 512 are giving the mainstream user access to affordable graphics equipment armed with enough memory support to tackle even the most demanding of graphics applications.