„The second quarter has been extremely challenging due to stagnant demand and price drops in the memory market, along with growing price competition in the mobile and LCD TV markets,” said Dr. Woosik Chu, executive vice president of investor relations. “Amid these challenges, Samsung demonstrated its competitiveness by reaching an operating margin of 21 percent in our LCD business, upholding an operating margin of 13 percent in telecom, and maintaining profitability in our memory business.”

For the second half of 2008, sales volume is expected to increase due to strong seasonality from TV set makers preparing for high product demand typical of the third and fourth quarters. Risks faced by the LCD Business in the next quarters include decrease in demand resulting from a global recession and the growing capacities of panel makers.

The LCD Business expects to enhance its profitability by focusing on large and premium panels such as full HD panels for TVs, LEDs for notebook PCs and wide panels. The launch of full-scale operations for phase two of the LCD 8-1 line will continue to secure frontrunner status in the industry overall, extending Samsung’s leadership gap over competing panel makers.

The Semiconductor Business anticipates that the global economic slowdown may impact its performance throughout the second half of the year with limited opportunities for increased demand. Despite relatively slack industry conditions, Samsung will further strengthen its cost competitiveness via ramp-ups of the company’s 56nm DRAM and 42nm NAND technologies. Furthermore, Samsung will invest more than 7.00 trillion won in DRAM and NAND capital expenditures, as announced earlier this year, to solidify the company’s market leadership and enhance future competitiveness.

Sales of handsets achieved 45.7 million units, with total unit sales for the first half of 2008 reaching 92 million units, an increase of more than 20 percent year-on-year. Strong sales of premium phones both in domestic and overseas markets boosted the mobile phone ASP to $143, an increase of 1.4 percent quarter-on-quarter, overcoming sluggish demand in developed markets.

The Telecommunication Business forecasts new challenges for the second half of the year, including a global economic slowdown, Korean won depreciation, and greater marketing expenditures. Samsung will address these challenges, and anticipates growth beyond the industry average, with a twofold market strategy: Continued development of strong product portfolios tailored to developed markets as well as emerging markets, and expansion of channel distribution in emerging markets.

To support integration of the PC, MP3 player and set-top box divisions transferred from the Digital Media Business, Telecommunication has established a new organization, the “Mobile Solution Center,” to accelerate content development. Samsung is committed to leadership of the mobile internet and multimedia era, providing a total solution portfolio that encompasses all elements from infrastructure, to multimedia devices, to content and services. 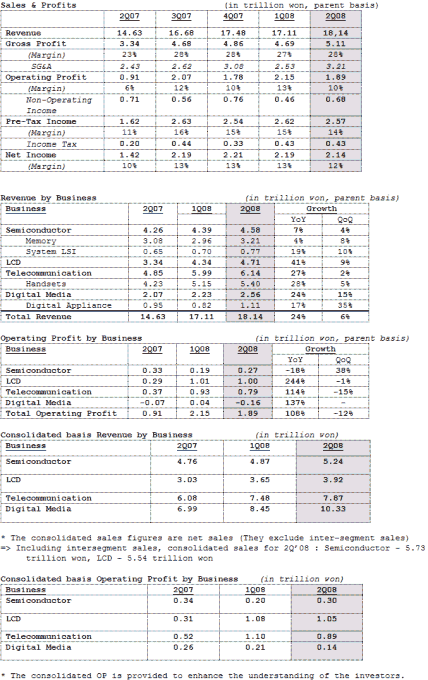